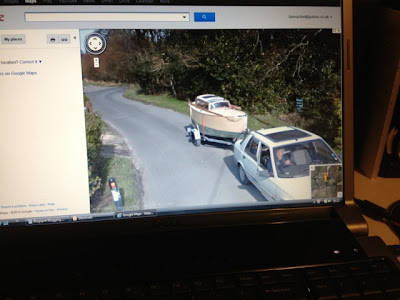 ﻿
'Faith', my old Paradox sailboat caught on Google Street View
As you may know, blogging with Blogspot is entirely free. That is the main reason I gave up making and maintaining my own websites. I’ve been with Blogspot for 7 years and altogether I have uploaded 1,497 articles, and at least three times as many photographs. Until about a fortnight ago photos could be uploaded directly from my computer’s hard drive, but without warning this method was rescinded. The remaining options for uploading photos are from Picassa Web Albums, mobile phones, webcams or URLs.

It seems to me that Google is seeking more and more control over those who use their programs. Their aim is to increase their assets for financial gain. The more they learn about us the more they can assert their power and influence upon us. If we are not vigilant, their vigorous marketing of Google Chrome will have us accepting it as our main browser. What we see through the screen of our computer, tablet or mobile phone, will to a certain extent be channelled to where Google wants to take us, whether it is social networking sites, blogs or comparison supermarkets like their ‘Beat that Quote.com’.

Google has the world’s biggest search engine, earning billions, reaping revenue from the clicking of mice throughout the Planet. Google has mapped the Earth in great detail and has photographed the streets of cities and towns for Google Earth’s Street View. My old Paradox sailboat 'Faith', was caught on Google Street View. (See first link below)

I could go on and on about Google manipulation, but the upshot is that when I want to upload photos to my Google owned blog I have to do it from my mobile. If I had not opted out from having every photo I take on my mobile from being automatically uploaded to Blogspot I would have had to pay the bill for being online during the process. There would be no extra bill if my phone was connected by WIFI, but more often than not, I take photos out of doors where the only connection is GSM which would be slow and very expensive.

Every photo you see on my blog from a week or so ago has been uploaded from my phone. I am not  happy with this new restriction. If there are any Blogspot bloggers who can still upload photos from the hard drive of their computer, please let me know, because it could be a glitch affecting my computer’s Blogger application.

I'm still uploading pictures from my hard drive, Bill.. I suspect either a glitch,or you've hit your free storage threshold

Steve, I think it may be a glitch.

There must be space for uploading photos, because I continue uploading them from my phone and they are not rejected.

Hi Bill, not at all sure what's going on? I am a great believer in 'If it ain't broke don't fix it'.
Now on my iPad it defaults to the mobile view and I have to manually change it to the web view - Aaargh !!!!
Agree with you also can't load images either video or photos for the hard drive.
Cheers
Paul

Bill - looks like you're right - I think this is your issue???

Thanks Paul and Steve,

I had a pop-up from Google pointing out that I had not been using the Google Toolbar as in the past; would I like to reinstate it by setting Chrome as my OS?

No thanks. I purposely disabled it.