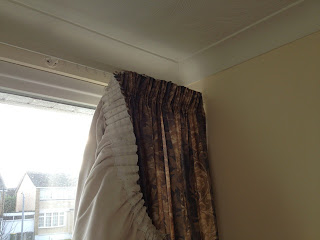 I’m not fussed about furnishings in the home; therefore I leave decision-making on that matter to my wife. I’m the handyman who has to make things work, whether assembling an Ikea pack or fitting curtains. Concerning the latter I am an expert, because through practice I have learnt many ways of doing them. 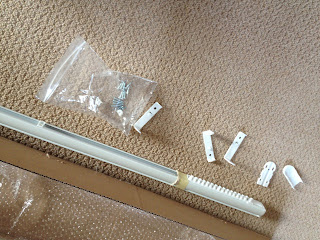 Supports for the vertical blinds


Forty years ago when we first moved into our present home my wife wanted me to remove all existing curtain tracks. She didn’t like them because they were attached to the ceilings. They had to be replaced with side hanging ones.  Since then I’ve had to fit vertical blinds to three south facing windows. The problem with vertical blinds is that a means has to be devised for supporting the curtain track far enough away for keeping the curtains clear of the blinds. I have been forced to come up with some ingenious solutions. 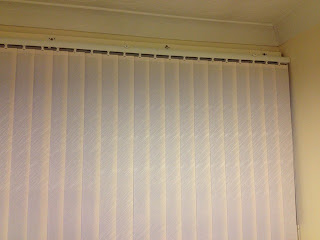 Because it was three or four years ago that I fitted blinds to the lounge window I thought I had got away with not fitting them to the box room, but that was not the case. It had always been on my wife’s agenda. Several times she suggested we should look into the matter, but there was never any urgency on her part until three weeks ago. Then, by the tone of her voice and the look in her eyes, I knew the task could not be delayed. We trotted off to our local Paul Simon store, where not only did we order and pay for the blinds but we also paid for new readymade stairway curtains. 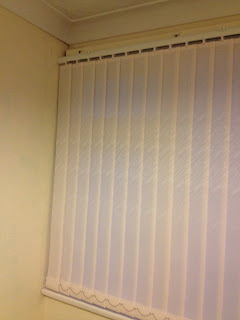 We collected the blinds this morning, but I was unable to start fitting them until after lunch, and by the time I had taken down the curtain track, light was beginning to fade. Instead of pausing for an afternoon cuppa I pressed on and I managed to finish before dark.


Since then, I’ve been mulling over ideas for extending the curtain rail supports and I think I’ve come up with a solution. If it works I’ll add photos so that you can see how it was done.

Just go for the online search that will give you many possible solutions and finally you get the best roller blinds at affordable prices. A wide range of roller blinds is available in the market.
By:
http://www.onlineblindsukltd.co.uk/