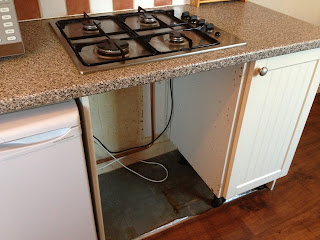 The old hob under which there were drawers

Yesterday it was blinds for the box room; today it was a new cooker for the kitchen. This morning I was notified by Short Messaging Service on my iPhone that the cooker would be delivered – at what time I did not know, but I had to take out drawers from below the hob and install them under a workbench where there used to be a dishwasher. The hob would also have to be removed to make room for the new cooker. I couldn’t extract the hob because it had to be done by a qualified CORGI technician. 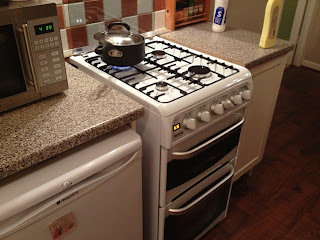 
The purpose of the exercise was to replace an oven and internal grill that had been installed on the opposite side of the kitchen. That particular Electrolux oven had been a pain from the outset. Three times the door had to be replaced. Whenever the grill was lit, fumes and smoke would belch into the kitchen until fat above the heating elements had burnt away. There was no external exit for the fumes; therefore they filled the kitchen, necessitating windows to be opened. 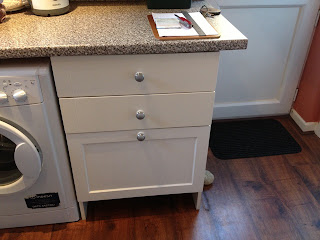 Drawers where the old dishwasher had been

By 1450 I had done what had to be done, and I was about to go online for tracking the expected cooker when the delivery van turned up. The vehicle was backed into our driveway and two technicians from Knowhow introduced themselves. It was obvious they knew what they were about. Within minutes they started installing the cooker. One of them carried out a gas pressure check while the other cut into the worktop and removed the old hob. Together they installed the new cooker and took out the old stove and grill.  They completed their work in an hour-and-a-half! 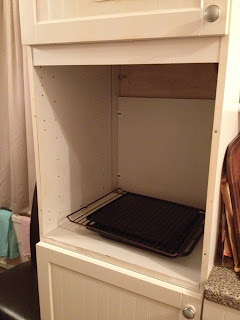 The space where the Electrolux oven and grill had been

I was happy, and I thought it looked pretty good. My wife was not so pleased because there were gaps between the sides of the oven and the workbench top. Also she did not like the cooker protruding in front of the workbenches. I explained that it could not be set further back because of the gas pipe and hose behind. I also said I would fill the gaps either side with aluminium mouldings or stainless ones. Maybe when I’ve done it, she will like the finished result.


I have yet to buy and fix a door for the void where the old oven and grill were. I shall also put shelves there for extra storage.


I am really pleased that we shall no longer be choked by fumes when using the grill.


Knowhow – the people who installed the cooker


Electrolux Oven and Grill, similar to the one that caused all the fumes