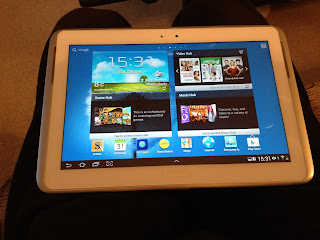 One of my daughters received a Galaxy Note 10.1 WIFI Tablet computer for a Christmas present. She is delighted with it. Today I tried the tablet and found operating the device intuitively easy. The computer has an S pen for drawing, sketching and other creative activities. There are front and rear cameras; the main 5 megapixels one at the back has a LED flash. A great feature is the multi-tasking facility, which is capable of running two activities on a divided screen, and the quad core processor allows four tasks to run at the same time. Touch operation is instant, which is excellent for when making documents using the virtual keyboard. There is no physical ‘home’ button, as with an iPad, but touching the home symbol at the base of the screen speedily opens the home page. 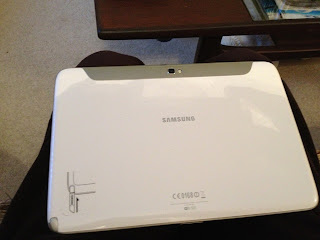 If I was looking for a tablet computer I would consider buying a Galaxy 10.1 which is a little more expensive than an iPad 2. Each tablet has access to thousands of apps; the former has an Android OS and the latter has Apples’ own iOS 6 featuring a dual core A5 chip.

You've fallen in love Paul, but I'm sure you are too wise and too old to allow yourself to become an addict.