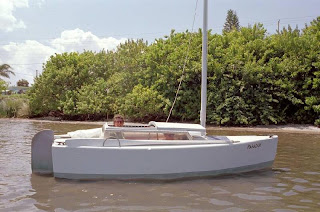 I have always been a fan of Matt Layden’s boats because they incorporate features that I value. He brings to the fore a certain utilitarian, minimalist functionality of design which is closely linked to sound ergonomics.


The most profound statements are expressed with few words to maximum effect, and his boats are like that. They are like the line drawings of Pablo Picasso who could reveal form and express emotion with a few apparent squiggles, but in fact his drawings are highly sensitive, select renderings of light and shade recorded by the artist through the means of a pen, pencil, charcoal or crayon.


Matt is always protective of his crew, and apart from his smaller boats, he never exposes the crew to the full blast of the elements: wind, waves, rain or sun. Safety is paramount, and he achieves this by engineering the boat in such a way that she can be operated from the comfort of the cabin. There is little need for her crew to go on deck. All that is necessary for working the boat is to hand. The ratio of sail to ballast is in favour of the boat remaining upright. Resistance to forward motion is minimal. There is little under the hull to cause drag; only the external surface which can be as smooth as a baby’s bottom. Above the waterline there is no excessive top-hamper to bring about resistance.  A single short mast coupled with a sail that has a low centre of effort can withstand the onslaught of an unexpected squall. Initial heeling brings high buoyancy on account of the hull having a single chine or firm bilge. His boats have excellent directional stability, and they are well balanced, while responding positively to the tiller. 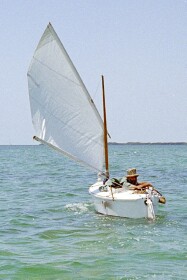 One of Matt’s earlier sailboats was ‘Swamp Thing’, a small decked sharpie that he sailed from Florida to the Bahamas and back. 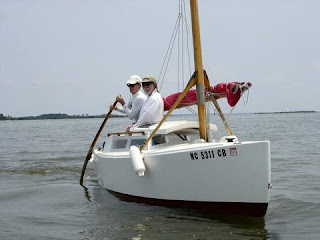 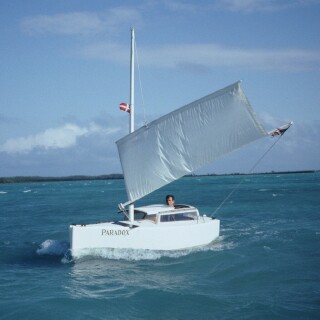 ‘Paradox’ is the most well-known of his designs. Many have been built worldwide, and on the whole their owners are full of praise for their boats. She is not without fault, however, the least obvious one being her hesitancy in going about from starboard tack to port tack. I believe this happens because her mast is offset to port and the sail is set on the port side of the mast, causing drag on that side. She is not the most spontaneous sailboat for launching and recovering from the water, particularly when being managed by a lone crew; hence day sailing from a road trailer is not really viable. The time and effort taken to launch and retrieve is just not worth it– at least, that’s my opinion. I do know of people who have slicker operations that was mine with ‘Faith’, because their road trailers are more user friendly. 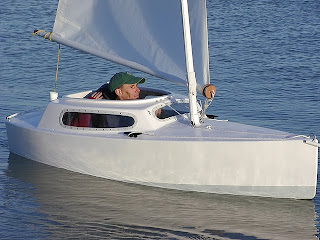 A little easier to manage is Matt’s ‘Elusion’, which he has transported on top of his car, but for me a road trailer would be preferable. Removable wheels that slot into the sides of the hull make it easy for portaging. ‘Elusion’ is not as foolproof when at sea as ‘Paradox’, on account of being more dependent on the ability of the crew for keeping her upright when the going gets tough on account of rough seas and strong winds. 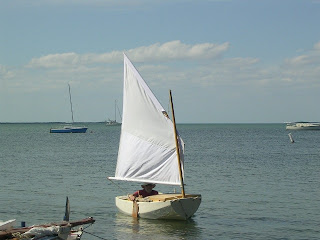 ‘Sand Flee’ is similar, but shorter and wider she is an audacious little cruiser - one that stretches the imagination, not the budget. In Matt’s capable hands she sailed hundreds of miles on the shallow waters of the Everglades. 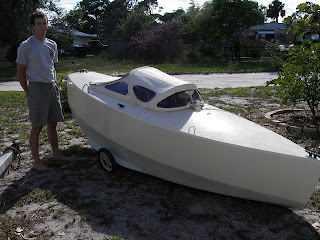 ‘Enigma’ is perhaps the most versatile of his designs, since she can be used for day sailing and for cruising.