Opening of the Paralympics 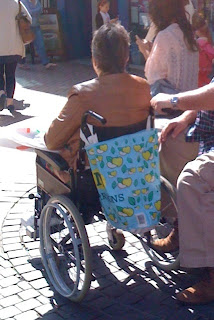 I was left bewildered after watching on television the first part of the opening ceremony of the Paralympic Games. By the time the parade for competitors had reached the letter ‘B’ I was ready for bed. The next day I thought I would try to make sense of what I had seen by surfing the Internet to learn more about the event.


The Mail Online published excellent photographs, each with pertinent captions, and Charlotte Higgins for the Guardian Online tried to make sense of what happened, majoring on how the show may have played a positive part in changing our views of the rights and roles of disabled people.


For me there were disturbing images, such as the 43 foot reproduction of Marc Quinn’s sculpture of pregnant Alison Lapper, and an enormous apple upon which a paraplegic sat in her wheelchair; then there was a huge revolving book portraying the Universal Declaration of Human Rights. I found these images rather confusing as they represented different aspects of overlapping themes: Reason and Rights, the age of enlightenment or intellectual revolution between 1550 and 1720, science and the Higgs particle. To confuse issues there was a story based on William Shakespeare’s Tempest with Sir Ian McKellen playing the part of Prospero narrating Miranda’s journey of discovery. Interwoven with all this stuff there was a series of songs and music that clashed, such as the singing of the National Anthem by a choir of 430 deaf singers and Caroline Parker belting out the lyrics of ‘I am what I am’.


Rather feebly Professor Stephen Hawkings suggested we should remember not only to look down, but up at the stars and be inquisitive. For him the ‘big bang’ was the beginning, the big breakthrough in our understanding of the universe. Centre stage, he was an example of what can be achieve by disabled people. 4,200 paralympians from 166 nations were to prove it too. Strangely all 62,042 spectators were given Gala apples for biting on simultaneously to make the biggest ever apple bite. Then there was the large symbolic umbrella covering a multitude of books representing knowledge and wisdom. Hundreds of dancers swirled umbrellas during choreographed routines. People were suspended by wires and lighter than air balloon-like apples floated around.


I was left wondering what it was all about, except for one thing; I am much more conscious of the difficulties disabled people have in overcoming their handicaps and of being accepted as normal people, no different to those who think of themselves as being normal.