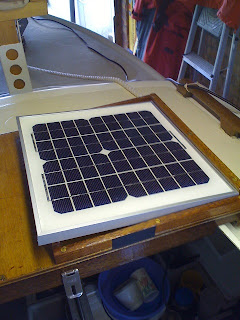 Early in July I ordered a 10 watt solar panel for ‘Sandpiper’ from a dealer at Ebay. I naturally assumed it would work and I attached it to the ship’s 12 volt battery. Immediately I knew something was wrong because there was a smell of burning and the connecting wire became exceedingly hot. Later, I examined the wire and I discovered that the multifilament core had melted, causing the micro-filaments to fuse together. In places where the outer casing melted to reveal bare wire I bound them with insulating tape. When it was manufactured the wires were soldered to the wrong terminals, i.e., positive to negative and negative to positive!


The chap who sold me the faulty panel assured me he would let me have a replacement. For more than a month, despite my reminders, he never sent one. Eventually I had enough and I asked him for a refund, which he agreed to do, but he did not refund me until I said I would inform Ebay.


I was left with a panel that did work, but was highly suspect, on account of damaged wiring. To make it work I had to reverse the polarity of the wiring. 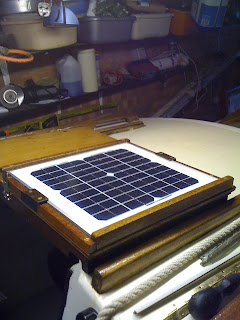 When I was at Poole Harbour the panel functioned well to provide all the energy required to work my Autohelm and to top up my iPhone. I intended to fit new wiring, but on my way home when driving at about 60 MPH along the M3, the panel was ripped off the hatch by the apparent wind. I thought it was securely attached by the framework around it because of the very tight fit. On my journey to Poole there was no indication that it was insecure, because it stayed put; even when sailing it never budged.


Well, I learnt that a replacement panel would need to be fitted in such a way to prevent a similar happening. I was glad that no one was injured and that no vehicle was damaged as a result. My granddaughter was following in her car, and it was she who contacted me on my mobile to inform me that I no longer had a solar panel. I dread to think what may have happened had it gone through the windscreen of her car. 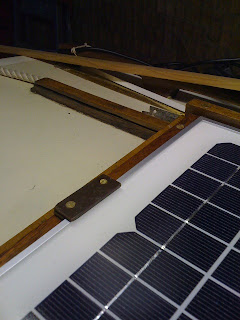 Well, that was not the end of the story. I ordered an identical replacement panel, but when it arrived today I discovered that it was smaller than the original having 64 cells instead of 72. I first tested it with a voltmeter and I was relieved to find that it was wired correctly and that it gave a healthy charge. Rather than have more hassle by returning the panel and paying postage I have decided to keep the new one. Furthermore, I have fitted it where the previous panel had been. I had to make a few adjustments to the frame, and I added Tufnol brackets for preventing a reoccurrence of the mishap on the motorway.
Posted by William Serjeant at 9:50 pm

well your experiences are quite interesting and informative to new users. thanks for sharing.

I hope readers of the blog can find topics of interest that I may have touched upon. The search facility at the bottom of the page is useful for this purpose.

Just key in a topic to see what the search engine finds.

You pick up some really good points in your post. Although the FIT has dropped, Solar PV is still a solid investment. This company provide information on what savings you can make today. Alternative Energy Companies