Messing about in a boat is the nature of this cruise. I was woken by a very noisy gaggle of geese. 'Sandpiper' would shortly be on the mud, but there was time for a quick breakfast before taking action.

My word, what a shock I had when I broke out the anchor - I had never seen such black, tenacious mud! There was no way I could continue until the mess was cleaned. I paddled the boat to a nearby Swift trailer sailer and tied a painter to her stern. Half-an-hour later my little boat was spic and span Bristol fashion.

At 0930 the wind was from the SW, about force 2; and heavy grey clouds hung low overhead.

I reached along the Upper Wych Channel towards Brownsea Island, then tacked to the south between port and starboard-hand markers via Ramshorn Lake and South Deep. At the southern end of South Deep I anchored off Cleavel Point.

On the way, there were a few light rain showers; the first of them had me changing into my waterproofs. At that moment the Harbour Master sped by in his fast RIB.

Cleavel Point provided a good lee. I drank coffee and watched three Cornish Shrimpers sailing by; then a bright yellow tripper boat, 'Maid of Poole' followed in their wakes whilst making a circuit of the Islands.

Later I ate lunch and watched a fisherman haul his nets for a very meagre catch of no more than a handful of fish. He worked from a smart dory named 'Eve Irvine'. I did not envy his job, routinely moving around the harbour setting and hauling nets.

At mid-afternoon my peace was broken by the return of campers to their site at Cleavel Point. They were a group of very active vocal youngsters who played a number of organised games under the supervision of adults. These teenagers had a great time, and I'm sure they will go home with happy memories of their time together.

It is 1630, and I am enjoying being at anchor here, doing very little except rest and be entertained by the changing scenery.

Now, at 1850, I have finished eating spaghetti bolognaise with tinned tuna, followed by a helping of delicious yoghurt. Fine drizzle transforms the view towards tree-covered Green Island, Furzey Island and Brownsea Island into an exquisite Japanese painting of delicate green and grey hues; each silhouetted island fades the further it is from me.

Soon it will be dark and I shall be snug in my warm sleeping bag dreaming of tomorrow and what it may bring. 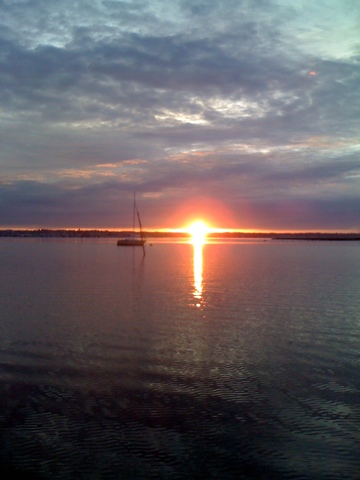 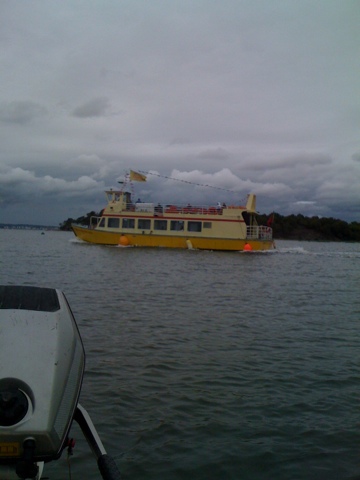 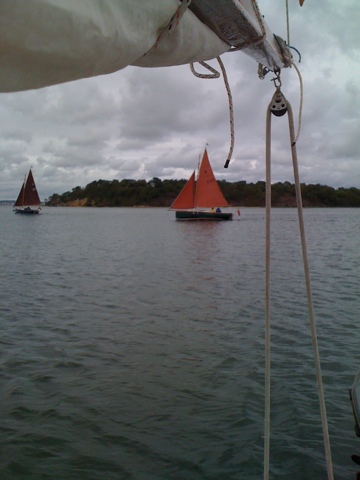 Posted by William Serjeant at 8:23 pm