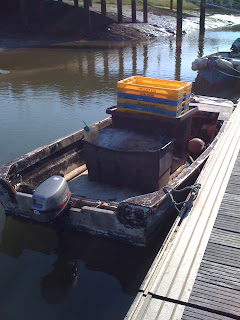 I am not thinking here of a traditional stacking dory as employed by Banks fishermen when line fishing for cod, but a more modern flat-bottom boat in the form of a punt, used as a workboat or tender, usually equipped with an outboard motor. I happened to notice such a boat at Burnham Yacht Harbour. She was one of those boats you would rather not pay attention to, the sort you pretend you have not seen, but this one took my attention for the fact that she was uncared for, yet she was a slave to the person who owned her. He would take his life into his own hands the moment he set foot aboard. 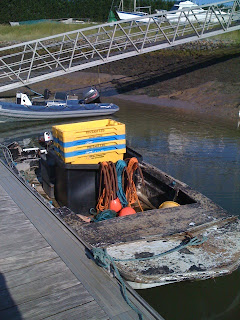 At one time she must have been a pristine white GRP, brand new vessel, the apple of her owner’s eye. Subsequently, after being neglected she was given a coat of dark blue, almost grey paint, appropriated for a workboat, to smarten her up. Perhaps instead of being employed as a tender for a yacht she became the means whereby a fisherman could transport his fishing gear. From that moment I wouldn’t think a penny has been spent on her upkeep. 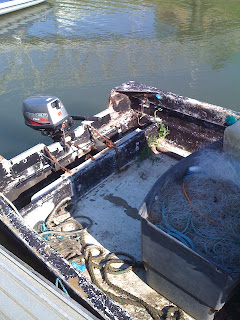 By carefully examining the photos you will observer that a wild plant has taken root by the inner transom on the port side. Rainwater swills around the floor. Fishing gear, including nets and floats occupy the central area of the cockpit around which the fisherman can move. I would not want to take her out of the Yacht Harbour and trust my life to her, particularly if the weather was at all rough. I wish the owner safe passage, and I hope the boat will not let him down as he has his boat.

I'm in lust.. The perfect tender :~)
Pity I missed you in Poole, it would have been nice to say hello.

The perfect tender indeed, one that few people would lust after, and hence could be left unattended with an assurance that no one would want to steal her - the engine perhaps, but I note it is chained to the transom.