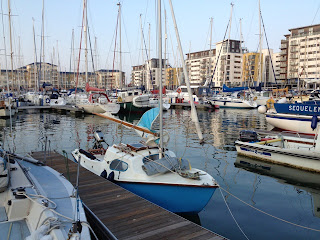 When coastal sailing one should follow the passage plan that was devised before leaving a safe haven, but the skipper should be prepared to modify his plan if wind and sea become stumbling blocks, rather than helpers as originally he thought they would. Having a bolthole to which to scurry at the onslaught of unexpected stronger wind than was forecast, is the ideal plan. Sometimes that is not possible, as was the case when I voyaged between Dover and Sovereign Yacht Harbour.


Prior to putting to sea, an examination of the weather charts showing positions of highs and lows, and listening to the Coastal Waters Forecast before setting out were pertinent preparations on my part. In fact, the wind that was forecast to come from the East never materialized, leaving me to motor 45 nautical miles with no suitable harbour where I could put into. Getting into Rye required the timing of being there shortly before high water, and it did not fit with taking the flood from Dover and the ebb from Dungeness. Then, there was the wretched Lydd Firing Range that intervened. As it is with the firing range at Maplin Sands, sailors are not permitted to enter the danger zones when firing is taking place. Indeed, it could be suicidal to do so.


As there was no wind, my Honda 2 HP four-stroke outboard was the power source. A separate fuel tank linked to the engine’s tank by a pipe through which petrol could have been pumped would have been ideal, but I never got around to making the modification before starting my cruise. Consequently I had to refill the outboard’s tank every hour, which was a tedious chore.


All was well that ended well, and I found myself and my little boat secure within Sovereign Yacht Harbour. Since then the wind has not played ball. Low pressure systems to the north and west have brought strong south-westerlies - exactly the opposite of what I require. The weather charts show that there may be a glimmer of hope for an escape from the Yacht Harbour at the earliest on Wednesday of this week, but more likely on Thursday, when the wind is forecast to come from west of south at Force 2, although a blip at 10.00 indicates a local Force 4 off Beachy Head, the very headland I shall have to round en route for Newhaven or Brighton.


Weather forecasting has improved over the years, and more recently, those who do it, have been consistently right with few exceptions, including the one above when the wind did not materialize. Reliant upon them, I am likely to return to ‘Sandpiper’ on Tuesday, to be ready for the Great Escape on Wednesday or Thursday.
Posted by William Serjeant at 6:31 pm