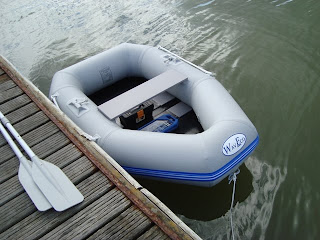 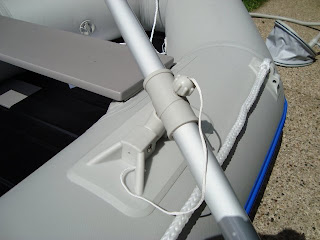 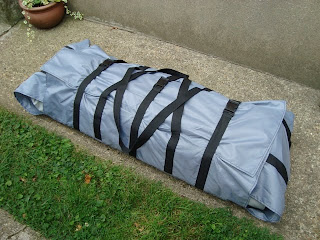 My rubber duck, more correctly my 7 foot WavEco inflatable dinghy, proved to be just the job for my single-handed cruise aboard ‘Ladybird’. Yesterday I washed her down and put her long nylon painter in the washing machine to restore its pristine whiteness. Today, I packed everything, including the oars and pump into her holdall, before placing the package in the loft where it will remain until my next cruise, or until I want to use the dinghy again.


Inflating her and attaching her seat took about five minutes. I could deflate her in the same time. I used to carry out both procedures when she was on the cabin top while I stood in the cockpit operating the pump. Launching the dinghy was easy - I simply slid her from the cabin top into the water, and getting her back onboard was almost as easily done by hauling her onto the cabin top. I used a sponge to clean and dry her before packing her into her valise. When not in use, she was stowed in the forepeak of the yacht.


As I expected would be the case, rowing her against a brisk wind and an adverse current took a lot of effort, but she was pretty stable, even when the water was choppy. There were only two occasions during the cruise when I didn’t risk using her to get ashore, because the wind was up to Force 6. She would have sailed downwind with ease, and she would have been quite buoyant, but I would never have made it back to the yacht. As it was, I had a really hard job rowing her at Starcross when the wind was almost up to a Force 6. I needed to get upwind of the yacht, and the only way to do this was by carrying her along the edge of the River Exe, but the job was difficult because the dinghy wanted to take off like a kite.


Apart from times when the wind was very strong, she behaved impeccably.


I don’t think she is suitable for two people. In my opinion she is a one man boat, although the blurb makes out that she is suitable for an adult and a child. As it is, I can only row her if tuck my feet under the seat. If I don’t, there is not enough clearance above my thighs for pulling the oars, and I cannot feather them, because they are held in place with hinged rods that pass through their shafts.


Despite her shortcomings, I am very pleased with my WavEco dinghy.
Posted by William Serjeant at 4:47 pm