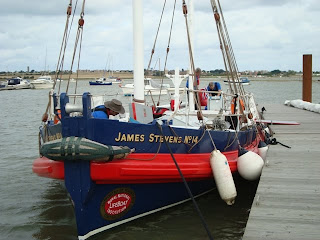 The 'James Stevens No 14' pulling and sailing lifeboat 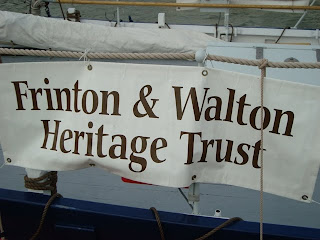 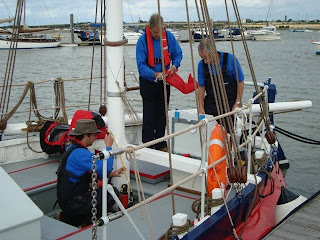 
On the afternoon of Sunday, 15th August, I was at Titchmarsh Marina where I had the privilege of speaking with members of the voluntary crew of the classic ‘James Stevens No 14’ lifeboat.


This historic vessel is the world’s oldest surviving motor lifeboat. One of twenty identical vessels sponsored by a Birmingham business man, James Stevens, she’s an example of a 43’ Norfolk and Suffolk pulling and sailing type lifeboat, built by the Thames Ironworks in 1900. This gallant little ship was launched on mercy missions 126 times and saved a total of 227 souls. Her most notable rescue was when she took off 92 passengers and crew from the ‘SS Peregrine’ stranded on Long Sand Head in a force nine gale.


She is now owned by the Frinton and Walton Heritage Trust, and her renovation was paid for by a Heritage Lottery Fund grant of £75,000.


Having changed hands several times since her service career ended in 1928, she has been used as a houseboat and for transporting timber on the Rivers Blackwater and Colne. She is currently in an excellent renovated state, and she is being used as a floating exhibit that can participate in classic boat festivals and lifeboat events. By arrangement (email: jamesstevensno14@yahoo.co.uk), members of the general public can have hands-on experience aboard her when she is taken to sea. Plans are afoot for her first sail with her dipping lugsail rig.

http://www.titchmarshmarina.co.uk/
Posted by William Serjeant at 10:46 am