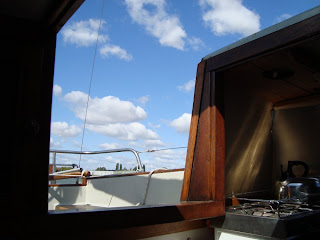 View from the cabin 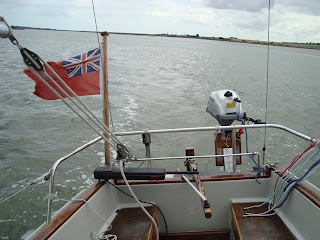 The Autohelm at work

I joined the boat at Burnham-on-Crouch on the morning of Wednesday, 2nd June, and after cruising her to Falmouth and back, I disembarked on the morning of Wednesday, 28th July, a total of just a little more than 55 days. Altogether I put into various anchorages and marinas amounting to 28 locations where I stayed from one to three days. The total distance sailed and motored was roughly a thousand miles (land miles).


I found the Seawych 19 to be a comfortable and easily manageable boat for this type of cruising. Her average speed was in the region of 3.5 knots. Providing she was reefed from Force 4 upwards to force 6, she could be handled very well. Going to windward in choppy conditions was a slow business, because she does not have sufficient waterline length to enable her to bridge the waves. A thirty-footer can do this, but not a broad-beam nineteen-footer like ‘Ladybird’. Her main drawback for single-handed cruising is the fact that she will not keep a course when the tiller is lashed, except when she is on the wind in anything less than a Force 3. My Autohelm could only manage the steering when the wind was less than Force 4. Mostly, I hand steered, some days up to 10 consecutive hours.


The boat more than matched my expectations, particularly when the going got rough, such as when we were crossing the Shambles Bank to the west of Portland Bill on the return leg. There the wind was in the region of Force 6 from astern. ‘Ladybird’ surfed down the breaking waves and could be steered with precision. Only once did she nearly broach when I misjudged a large wave. She handles better if she has plenty of weight up forward; in this respect, stowing the inflatable dinghy in the forecastle did the trick.


The Honda 2.3 outboard was first-class, but perhaps not quite powerful enough to push the boat through choppy water; however, under those conditions, ‘Ladybird’ could be sailed. Replenishing the fuel when doing long stretches was a bit of a bind. This tedious, hourly event could be overcome by modifying the fuel tank filler cap so that it has a tube passing through it that can be used to pump petrol from a supply tank housed in the cockpit. If I were planning to keep the boat, I would make the modification.


The month of June came up with excellent sunny weather, if not enough wind; whereas, July brought days that were sometimes too windy and lacking sunshine. The plus side of the July weather was that the winds were mainly from the west which was very helpful for the homeward legs. Only once in the two months I was away was there a day when I could sunbathe while sailing, because the wind was otherwise too cold.


All in all, the cruise was a great success and almost all of it was pleasurable. The times that I remember most vividly are when the wind was strong and the conditions were demanding. These were the most exciting and challenging moments, and I shall always remember crossing the Shambles Bank, when ‘Ladybird’ surfed the waves towards Portland Harbour against the ebbing tide.


Meeting relatives, friends and strangers added a human and social dimension to the cruise. I particularly cherished times with my relatives, and it was great to renew acquaintances with my distant friends. A surprising number of people took an interest in the sailor and his little boat, even those who owned very large sailing and motor yachts stopped to pass the time of day and talk about boats. For the first time ever, I was invited by the owner of a very large motor yacht to have coffee with him aboard his vessel. I find that generally, motor yachtsmen do not socialize with those who own sailing yachts.


If you want a challenge, you want fun, you want adventure and you are reasonably fit, I thoroughly recommend you have a go at sailing along the South Coast of England aboard a small yacht.
Posted by William Serjeant at 5:16 pm

I've sailed a Seawych and most of the South Coast (in bigger boats) so I know this is an amazing achievement of yours. Congratulations.