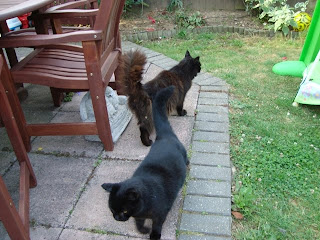 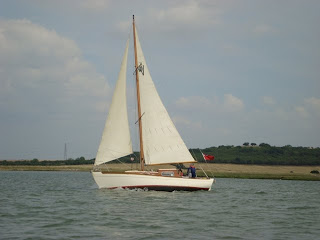 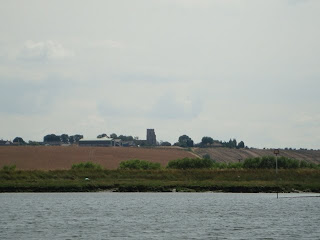 Canewdon Church, as seen from where I anchored 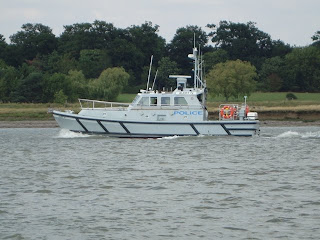 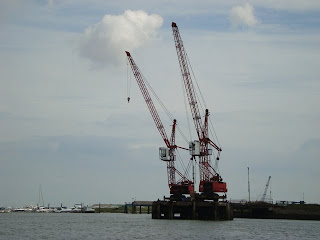 The first task before streaking off to Burnham for a sail was to feed my youngest daughter’s cats. That having been done, my time was free for a jaunt on the River.
As usual, motoring along the winding, narrow road that leads to Burnham, my speed was restricted to an average of 40 mph because of slow vehicles ahead, but I was not in a hurry. High water wasn’t until 1228, and it would be a bit later at Fambridge where I intended to go. Unusually, the wind was from the south, which meant that I only had to put in a couple of tacks, because the River Crouch bends to the southwest after Creeksea, where it passes south of Bridgemarsh Island.


I left the mooring at Rice and Cole at 1050, and in the lee of the southern bank I made full sail and cut the engine. A variety of dinghies were engaged in a handicap race heading eastwards towards the River Roach, and I noted that they were being sailed by girls – there was not a boy to be seen. I can only assume the race was organised specifically for members of the fairer sex.


At 1220, in time for lunch, I anchored ‘Ladybird’ in the lee, close to the south bank, opposite the entrance to Bridgemarsh Creek which cuts behind Bridgemarsh Island. There was no shortage of yachts sailing up and down the River, and one of them was ‘Hussar’, a Vertue (No 21). Years ago I had seen her at Heybridge Basin. I have always liked Vertues, particularly the early ones which were narrower than later ones. In fact I was so mad on them that I travelled to Northern Ireland to view one with the purpose of buying her, but for some reason I cannot now remember, I decided against getting her.


The Vertue Class of yacht was made famous by Humphrey Barton and O’Riordan who sailed Vertue 35 across the Atlantic in 1950. On the way they encountered five gales in twenty-one days!


After lunch and a snooze, I retrieved the anchor and ran with the ebb, using just the partially furled Genoa, until Cliff Reach where I had to set a reefed mainsail because the wind had increased and backed to the southeast. At Wallasea, by the jetty which has two cranes for offloading wood from ships that berth there, I took in the main and started the engine. From that point it was a quick trip through the moorings to ‘Ladybird’s’. We had sailed a total of 14 miles.


I was home at 1700, after an enjoyable interlude aboard the yacht since sailing her with my eldest daughter last Thursday.