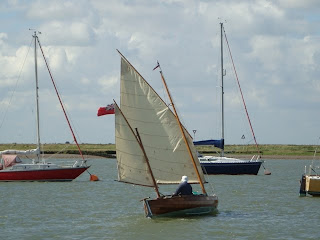 'Lucky Star', a Victorian canoe yawl I saw before my crew arrived. 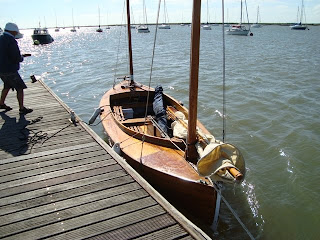 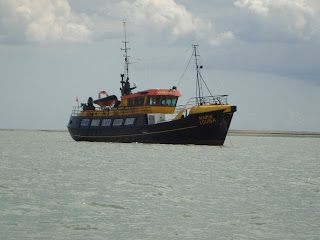 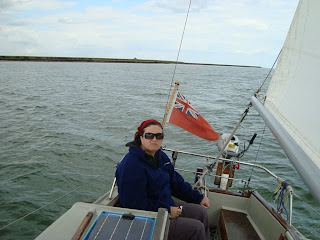 Today was one of those days when everything went according to plan. My eldest daughter joined me for a sail to see the seals at Maplin Sand. Initially the wind was from the west, straight down the River Crouch and out to sea. It is seven nautical miles from the Rice and Cole pontoon to the sandbank, where the seals rest. Getting to them was the easy bit, because the ebb and wind was in our favour. We first had to keep clear of a fleet of Optimists racing and when we away from the moorings we made sail. Beyond the entrance of the River Roach there were very few yachts about, but more materialized as the day progressed; some were making up to Burnham on the last of the ebb and two others were going in our direction.


The Range Safety Vessel, the ‘Marie Louisa’ was anchored close to the Crouch Buoy. Three or four times we saw large, intensely bright flames erupt from the weapons testing area. We could only assume that quantities of unwanted inflammable material were being burned off. Later, while returning to Burnham we were asked by a guy aboard the Safety Vessel to put a short tack in to avoid getting too close to the shore where the ignitions had taken place. Since he referred to me as ‘Sir’, I obliged him right away by putting in the short tack.


Sailing ‘Ladybird’ with a ‘live’ Autohelm that can respond to what she sees is more convenient and safer than relying on my blind electronic Autohelm that cannot anticipate. The latter we only briefly used when the going was easy and we wanted a break. I think it only took us about an hour-and-a-half to reach a spot where we could see the seals while anchored for a picnic lunch. My new intelligent Autohelm in addition to her helming duties provided the food and made the hot drinks. Before breaking out the anchor under sail, my crew borrowed the ship’s binoculars to observe the seals more closely. When we were underway, I scrubbed the foredeck and sluiced it down with seawater to get rid of the mud that had been brought up with the anchor.


Tacking back up the River was quite an interesting exercise, because the wind kept fluctuating in strength and direction. Sometimes we could point the boat straight up the River, and there were times when we seemed to just zigzag to the shallower water either side of the main channel. I was pleased not to be on the helm, and remarked to my crew that she was doing very well, as it was a very long while since she had sailed a boat.


We enjoyed our time together, and I’ve been asked by the crew to invite her again. If the boat is not sold in the near future, I’m sure we’ll have another sail.
Posted by William Serjeant at 8:57 pm