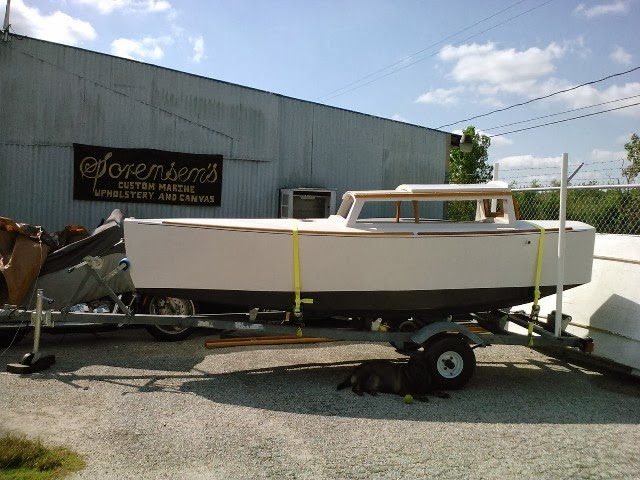 Sean Mulligan has entered the micro-sailboat realm and is being invigorated by it – not that he lacked energy and enthusiasm for sailing before becoming the owner of the Paradox Tardis which he renamed Scout. He acquired the Matt Layden designed solo cruiser from Lezlie Hensen* who built the boat to a high standard. Sean was the founder of the Havasu Pocket Cruiser’s Convention and previously sailed with his wife Jo on their trailer sailer named Dauntless which they still own and sail.


Sean has done a great job of finishing Scout, and he has frequently sailed the boat over the past few months on Lake Havasu. He has made launching and recovering a piece of cake; in twenty or so minutes he can have her from being on terra firma to being in the water. Mind you, the slipway is ideal, since it is non-tidal and has a jetty alongside, to which the boat can be moored while he adds water ballast and does final preparations.


The element that Sean has brought to the Paradox sailboat global fraternity is his dynamic energy which is contagious. His old Blogspot blog**and more recently his new website Full n By.com*** are packed with useful information and great accounts of his sailing challenges, photos and videos. Sean also has a fabulous YouTube Channel.****


Pocket and Micro-Cruisers – A Band of Brothers


Importing a Paradox to the UK from the US East Coast

Bill...I am flattered beyond belief by your kind words. Thank you. As you know, You, Peter, Dave and Mindy, and Matt have all been inspirations to me. :-)