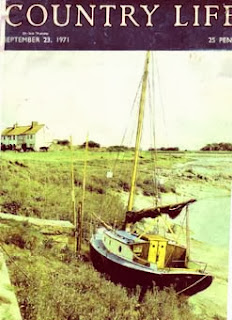 
My daughter’s partner recently bought a gaff cutter that may have started life as a Beer Lugger built by Lavis of Exmouth. ‘Temegani’ has a fascinating history. Amazingly and coincidentally, she was almost totally rebuilt by my friend Bill Johnson. I say ‘amazingly’, because what are the chances of such a coincidence happening? I saw the boat being planked …….. perhaps in 1981 when Bill was also building his own Eventide 26, the one he and I attempted to sail to the Azores.(* See link below)
‘Temegani’ was originally a clinker Beer Lugger, or so I understand, quite a large one at 26’ LOA. Bill planked her in double diagonal larch and increased her scantlings, replacing frames, keel and sternpost. He added external ballast in the form of a mild steel casting. There was 10 hundredweight of internal lead ballast. He built a new mast with crosstrees and fitted a horse for the mainsheet.
One anomaly would appear to be her wineglass transom which is not characteristic of a Beer Lugger. Another oddity is her original light build, because she would have been launched and retrieved off a steeply shelving pebble beach. Could she in fact have been an Exmouth Lugger? There on the Exe, she would have dried out on sand or mud while tethered to a mooring. Her shallow draught would have been ideal for sailing in the estuary and over the bar. I think her overall length of 26’ makes it unlikely she was Beer Lugger.**
Links


Model of a Beer Lugger for Sale

What a lovely boat!