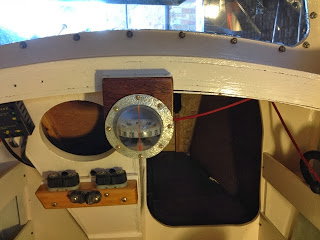 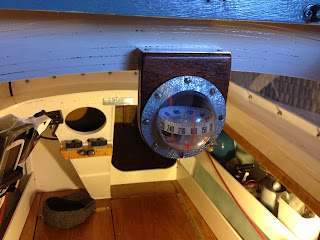 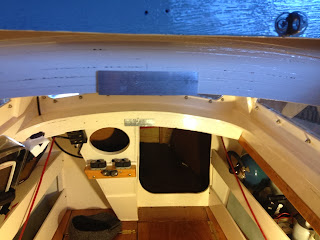 I have decided to abandon the old Bosun compass in favour of the Plastimo bulkhead compass. The latter takes up less room, and it is less vulnerable to damage.


I made two aluminium brackets for fixing the compass. I put one at the forward end of the cabin above the bulkhead, and another on a beam below the hatchway. When I’m sat on the aft deck, I’ll deploy the compass in the hatchway, where it will be protected from sunlight and spray.


When conditions require me to have the hatch closed, I shall be able to see the compass clearly, irrespective of where it is mounted.


Most likely I’ll sell the Bosun compass, despite being better for steering a more accurate course on account of degrees being marked in twos, which is better than fives, as with the Plastimo. The Bosun compass has a grid for more accurate steering, and the helmsman does not have to remember the required course.


Sometimes a compromise has to be made, and on this issue I’m prepared to accept the disadvantages of the Plastimo compass, mainly because it is not as bulky as the Bosun, and it is less likely to suffer damage.
Posted by William Serjeant at 7:44 pm

The blogger has provided good information for the reader about Plastimo compass. Thank you to the writer, appreciate the content and keep up the good work.