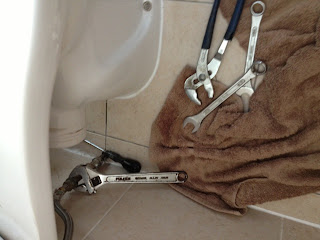 My plan today was to apply antifouling to ‘Sandpiper’s’ hull, but fortune would have it, as I was doing the ironing, prior to working on the boat, my wife called me to the kitchen. By the tone of her voice I knew there was something wrong. She pointed to a damp patch on the wall. I traced the source to a point under the ceiling, almost directly below the upstairs toilet. An inspection of the flexible pipe for supplying water to the toilet cistern suggested to me that it was perished near the upper end; hence the leak. I attempted to turn off the mains stopcock, but it did not fully stem the flow. I opened the lowest tap which was in the kitchen. 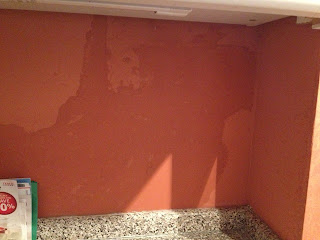 This effectively stopped water rising to the leaky pipe; therefore I was able to remove it and take it to a builders’ supplier as a pattern for a replacement. Back at home I fitted the new pipe and opened the mains stopcock, but at the upper end of the new flexible pipe the leak was as bad as ever. I turned the handle of the stopcock to stem the flow.  Horror of horror, water continued flowing through the pipe! The stopcock was totally ineffective.


The answer was to turn off the inflow at the water meter which was outside the house. The chamber containing the meter and the mains tap was flooded! I had to remove the water before I could turn off the tap. Mercifully, the meter stopped ticking and the flow was stopped.


Time for doing this job without help had passed. I urgently required a plumber. Two hours later he arrived. He refitted the new flexible pipe and turned on the water. To his surprise there was still a leak where the pipe entered the cistern. Another examination revealed that the plastic fitting to which the flexible pipe was attached, was cracked. Having installed a new fitting, he tried once again, but water started dripping from the ceiling! All of this activity had shifted the down pipe that entered an elbow joint below the bathroom floor causing it to be dislodged. 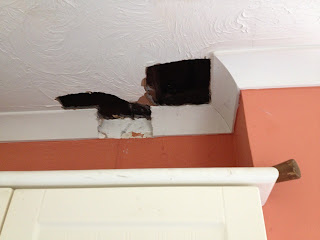 For the plumber to get at the joint, parts of the ceiling had to be removed. With my help he managed to fit a new joint. Altogether he took 1 ½ hours to fix the plumbing.  I was charged £252.12, which included the cost of new parts.


Divine providence enters the equation, because I am glad this has happened before setting off on my cruise with ‘Sandpiper’. All the plumbing has been renewed and it should be good for years to come.

Maybe I’ll get the antifouling on the boat soon.

It would seem Devine Providece comes with a hefty bill these days Bill ! I think this was one of those times when even a saint would swear.

The insurance guy is coming tomorrow. I may recoup some dosh.

Beautiful day - did the antifouling.

Hoping to launch by the weekend.

Divine Providence? I think I had never got it but after getting it yours one I can get it.