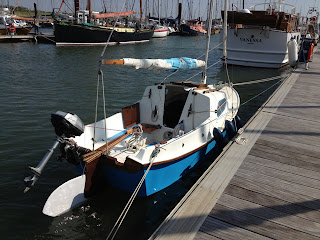 After arriving at Burnham Yacht Harbour there was an hour and a quarter before high water.  I started rigging the mast, and I was asked to move the boat to make way for the hoist. This is a huge mobile frame supported by large wheels like those of a tractor. The motorized vehicle has two strops for lifting and lowering vessels so that they can be transported and launched or retrieved from a structure that extends over the water.


In all I took three quarters of an hour to prepare and launch ‘Sandpiper’ via the slipway. That was a record time for me. Normally, I give myself at least an hour and a half for launching. Ideally, I like to launch and retrieve my boat shortly before high water to avoid mud and weed that lurks around the low water mark. 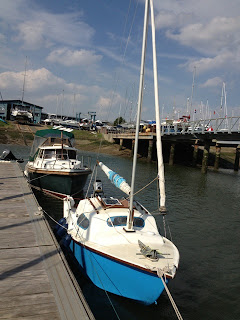 The wind was blowing onto the slipway which was a help to begin with, because it kept ‘Sandpiper’ snugged to the side of the slipway, allowing room for the trailer to be towed clear. I used a rope to let the trailer into deep water so that the boat could float clear while I held a long painter. Having parked the trailer and car I pushed the boat into the wind and climbed aboard. Immediately I grabbed the paddle and stroked three times each side of the boat. As long as I kept the momentum by paddling in this way I could make headway to a pontoon where I disembarked. From there I was able to tow the boat around a stationary motor yacht to a pontoon allocated by the Harbour Master.


After lunch I set up the jib and main. I discovered that the jib was not rotating as freely as it should. I’ll have to solve the problem on Saturday before I take the boat for a trial sail. I tested the engine and bought a lock for it.


Well, it looks as though I’ll be making a start to my cruise on the weekend. The forecast for Saturday looks pretty good, with only a few showers around mid-day. Tonight and Friday there will be rain. It’s just as well I left the cockpit drain bung out.
Posted by William Serjeant at 8:38 pm

Sandpiper's looking good Bill. Hope all goes well on Saturday. I'm hoping to make and fit the cross member this weekend so I'll be buried in the bowels.

You are a surgeon doing reconstructive surgery to revive a worthy patient.

Your reward will come when you see her in her new glory.