I'm pleased to say I did not contract 'Portitis', very nearly though. A dark dismal dawn saw 'Sandpiper' under full sail with a fair wind leaving the Cattwater. She was bound for Fowey, and that's where she put in after a fast passage, completing 22 nautical miles in just under 6 hours at an average speed of 3.7 knots.
That sounds good, but the fact is the wind fizzled out, and the engine did most of the work with the help of the ebb.
Motor sailing is never much fun. However, the navigation was interesting, because one of my GPSs failed to register any satellites; hence it was out of action, and to complicate matters there was fog between Looe Island and Udder Rock. The Inshore Forecast was absolutely right, even giving the location and timing - brilliant!
There was a Royal Naval Frigate and an Assault Supply Ship at anchor near Plymouth Breakwater. The former seemed to shadow me when I passed through the Submarine Exercise Area to the SW of Whitsand Bay. Four small fishing vessels were at work south of Looe Island.
Looe looked quite inviting, especially as I could see I would be enveloped in fog further west, but I resisted the temptation, and kept to my original passage plan. The temperature dropped as I entered the fog, and very fine drizzle coated my spectacles.
Not far from the South Cardinal Buoy marking Udder Rock, the temperature rose and visibility improved. Two identical gaff cutters were heading east, slightly inshore of me. Two more yachts soon followed them, all under motor. The top of Pencarrow Head, an anvil shaped peninsula, was shrouded in fog.
Entering Fowey is always sobering, because Punch Cross Rocks to starboard are marked with a white cross, a signal reminding those approaching in a gale that but for the grace of God they could end up on those very rocks.
Inside the entrance, whitewashed and cream buildings in tiers on the hillside to port brighten the scene, and around the corner to starboard where I have picked up a mooring is the pretty haven of Polruan.
As I write at 15.45, sunlight penetrates amorphous grey clouds, paradoxically giving a warm glow to all around. Gulls squawk, the drone of a boat's engine and the sound of a high-pitched drill ashore indicate that I am not alone.
What next? I've no concrete plan, but I want to sail to Falmouth , maybe tomorrow. I'll see what the weather brings. Incidentally, I cannot access my usual Internet, and if you are reading this today, Tuesday, 18th June, it is because I have purchased an hour's WIFI from Fowey Harbour Commisioner's Hub.
Note
I failed to get into the Harbour WIFI. So if you are reading this, I succeeded in getting into my 3 network. 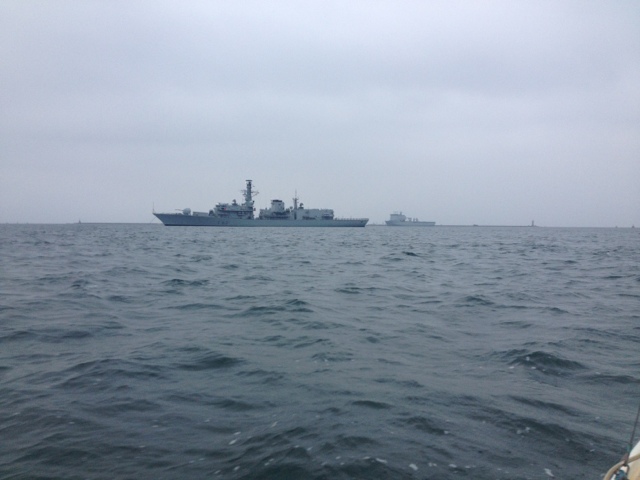 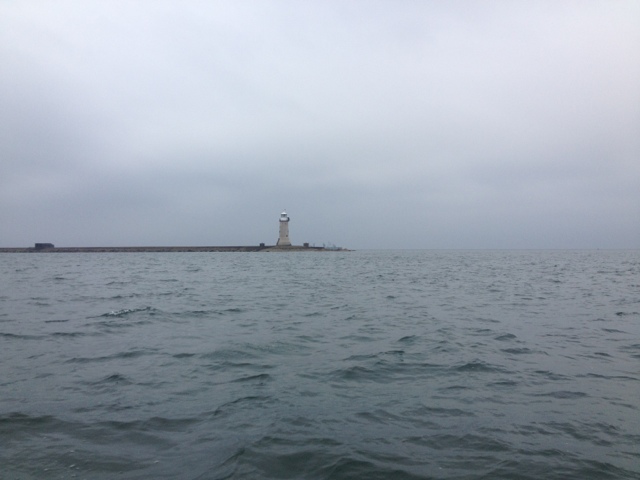 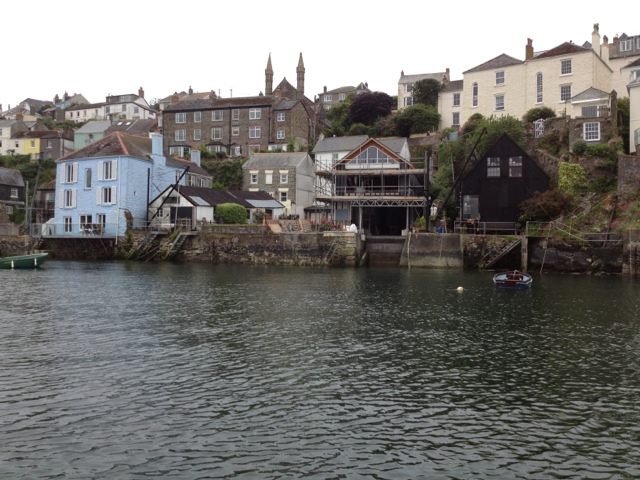 Posted by William Serjeant at 6:33 pm

I beleive there may be some dampening of GPS signals when near Naval vessels. I think its to discourage bad guys from homing in on a ship via GPS. Not sure if they do that in UK but if GPS starts working again and no Navy in sight, that could be it

Fowey is my favourite port, this is the first year for ages that we haven't been (yet) - slighly concerned by the idea that the navy could block gps signals, equally I remember a similar foggy day, a complete white out between the yealm and salcombe, the radar showed nothing, not not even the mewstone (19metes) as we passed

Max, I hope you manage to visit Fowey. I would normally stay there longer, but I wanted to reach Falmouth before Thursday which was accomplished.
Cheers,
Bill.

When I reached Falmouth on Wednesday everything was OK. The GPS was back in working order.
Cheers,
Bill.