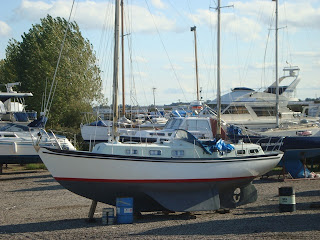 
It is said that owners of their dogs look like their dogs! I wonder if a parallel simile can be applied to owners of Seadog Ketches. If so, they will be solid, strong, and dependable, just like a St Bernard dog.


In truth, the GRP Seadog 30 has been around since 1964 when the first one was designed and built by Reg Freeman, A.R.I.N.A.. She was originally conceived as a comfortable motor sailer, but in practice she has a good turn of speed under sail. Two versions were produced: the bilge keel Seadog 30 and the single keel Deep Seadog. The latter has a draught of 4’ 6”, while the bilge keel boat draws 3’ 6”. Both of them have secure centre-cockpits protected by fixed windshields, a feature by which Seadogs can be identified. Reefing in strong winds is simply a matter of downing the mainsail which leaves the yacht balanced and manageable. Her wide side decks and high, strongly-supported safety lines are effective, enabling the crew to securely move around the boat.


One Seadog has completed a solo circumnavigation, which says something for the viability of these yachts as ocean cruisers. The shallow draught version can transit through the French canals, and to make things easier in that respect, her masts are mounted in tabernacles, which simplifies the job of lowering and raising them. Her 36 HP Perkins Diesel, situated under the cockpit sole, provides more than ample power for making progress when the wind is from dead ahead. Fuel and water are stored within her bilge keels. She has two 26 gallon tanks for diesel, and two 23 gallon tanks for fresh water.


By modern standards, the accommodation is not as spacious as that of today’s beamier yachts, but for a couple living aboard, there is adequate room. I like the galley situated on the port hand side by her companionway where steam and heat can be dissipated through the open hatch. Likewise, her navigation table and instruments are located the other side of the companionway, giving direct access to the navigator. A luxurious feature is her separate aft cabin where there are two single berths, or a small double. Very sensibly, Reg Freeman designed the forepeak as an area where sails and gear can be stowed. The fore cabin also houses the heads, a basin unit and two hanging lockers where unwanted clutter can be hidden away.


The majority of Seadogs where manufactured by Reg Freeman Yachts; others were made by J. G. Meakes and Company. Some hulls were moulded in Holland for home completion, and one or two of them were fitted out as motor yachts. Altogether, 140 Seadogs were built between 1967 and 1974. The Seadog Owners’ Association states in their website that 126 owners are members of the Association, all with Seadogs in commission. That says a lot for the durability of the Seadog 30 and their popularity.

As an owner of a Seadog must say I am not so heavy, at 62 kilo - being quite tall ;) But may be dependable and strong, why not? My girl also being lightweight I have chosen Seadog precisely because of that - heavy ketch demands more skill to sail her, but less bodyweight...
Richard

As Owner of Wayluya Seadog am surprised took me so long to stumble accross this blog / post......nicely put.

As Owner of Wayluya Seadog am surprised took me so long to stumble accross this blog / post......nicely put.