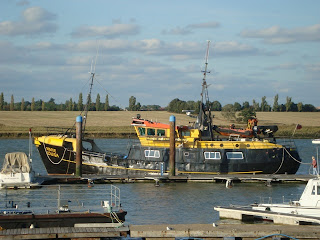 I’m constantly amazed at the amount of information there is available from the World Wide Web. Yesterday I mentioned that I had visited Wallasea Island where I photographed old navigation buoys that had been retrieved from the River Crouch as part of a buoyage improvement scheme. I also photographed ‘Marie Louisa’, the Maplin Firing Range Safety vessel. She was docking at Essex Marina, presumably after a stint when her crew had maintained watch during a firing session.


This 26 metre 147 tonnes, ex Dutch trawler docked beside an outer pontoon without hassle. The photo shows her as she was being gently reversed to bring her stern towards the pontoon. A handler grabs a warp from the ship’s counter for making it fast to the pontoon. Her bow warp dangles within reach for the handler who will attach it to the pontoon.


From the website* of Barbary Charters, it would appear that they are the owners of ‘Marie Louisa’. Amazingly, she has 3 heads, 2 showers, 2 single cabins, and a crew’s cabin with 4 bunks. On the upper deck there is a dining area and a saloon, a galley and a scullery. The ship’s navigator has a gyro compass and Furuno radar which is linked to an electronic charting system. Apart from the gyro compass, that’s nothing more elaborate than navigation equipment found aboard many yachts today. Surprisingly, her 300 HP Gardner 8L3B Turbo diesel engine can only generate a speed of 8 knots, but she does have a fast rib that can be launched and retrieved by the use of mechanical davits. She has a maximum draught of 3.2 metres which means there are limitations as to where she can be deployed in the Thames Estuary. Mostly, I have seen her anchored a short distance to the east of the Crouch Buoy, from which position her crew can monitor vessels coming in and out of the River.


Day Sail – when I previously photographed the ‘Marie Louisa’

http://svbrigantia.blogspot.com/2011/07/july-long-weekend-sunday.html
Posted by William Serjeant at 9:15 am