Afternoon Stroll by the Crouch 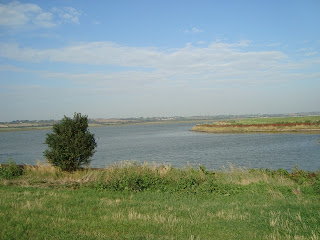 Yesterday, by way of relaxation and gentle exercise I walked a stretch beside the River Crouch where I seldom go, that’s on the south side of the River from South Fambridge eastwards as far as Landsend Point. High water at Burnham was 1530, with a height of 5.1 metres. I mention this because by the time I arrived at Landsend Point the ebb had been running for half-an-hour or more. Yachts proceeding up River would do so with the flood, and those going the other way would make use of the ebb. So there was a good chance that I would see some action, both before and after high water.

As usual, when I’m beside the River I carry my camera, so that if I see anything of interest I can whip the camera out of my pocket and take a photo of it. Later, at my leisure, I can examine the digital image. Yesterday was no exception. I carried my camera in anticipation of seeing something worthy of being photographed. 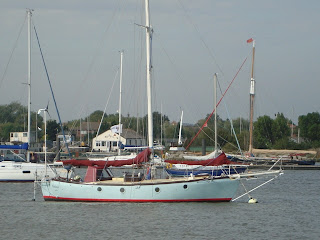 The first item that excited my imagination was the concrete sloop, ‘River Dancer’. I had taken photos of her before, and I had written about her on this Blog. For some reason she gets me thinking of a nomadic life, roaming the oceans. There is something romantic about her - not romance in a fleshly sense, but romance in travelling encounters, meeting people and visiting places. I imagined her anchored off some exotic island, gently rolling to the rhythm of the sea, the heavy scent of succulent fruit and the heady perfume of enticing blossoms welcome her crew ashore. There, Polynesian beauties placed colourful garlands around their necks, and the elders of the village invited them to drink Kava Kava. 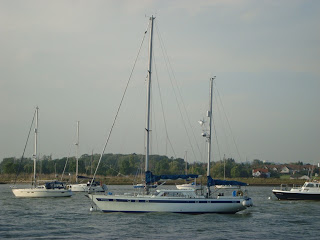 For some unaccountable reason the next item of interest was a large Moody ketch. I’m not normally attracted to ‘plastic’ boats, but this was something different. She was the largest yacht at the Fambridge moorings, perhaps forty-five feet in length. I wondered who could own such an expensive vessel. Looking at her made me fearful. Who would want the responsibility of caring for her? No doubt the owner has the means to pay someone to do it and help him sail the vessel. I certainly would be keen to take her out on open water; there to feel the wind on my cheeks and admire the power of the wind in her sails, as she speeds to windward. 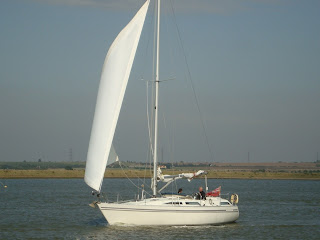 On a smaller scale, another Moody came zooming up the River, being driven by a stiff southeaster, with only her Genoa set. Later, when the ebb was running, she motored back the way she had come. At the same time, a large, streamlined catamaran followed behind. She gave me the impression that she would be very fast under sail. Her mast was thicker than a man’s torso, and it towered high into the air. I would be distinctly uneasy sailing her in anything of a blow, being fearful of capsizing her. Her crew undoubtedly had a problem as to where to stow the fenders. Their solution was to dangle them at the stern where they incongruously resembled baubles on a Christmas tree. 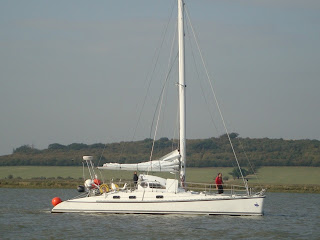 Landsend Point is south of Bridgemarsh Island, about a mile-and-a-half to the east of South Fambridge. There you can feel solitude, yet you are only a little way from hives of activity. There you can commune with the Creator of the Universe, and find peace with Him, as I did yesterday afternoon. There the sun shone and the dappled water sparkled while rippling a joyful tune as it lapped the stone sea wall. The wind sighed, and there was calmness within my heart. I was glad to be alive.

http://www.ehow.com/about_5367937_hawaii-grass-skirt-history.html
Posted by William Serjeant at 11:17 am