Whilst we were engaged in the dredging match there weren’t many opportunities for studying participating vessels, but back at home I had ample time for examining photos of them. I never realised how individual they were, but they share a common feature – their moderate to low freeboard for facilitating the deployment of dredges and fishing gear. 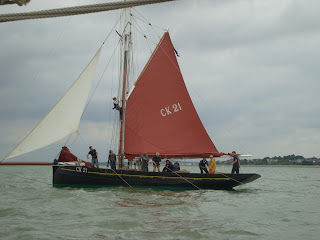 Being one of the larger smacks, CK 21 can comfortably manage three dredges. Her upright stem and sloping transom give her a real East Coast look. Note that a young lady is climbing the mast - presumably to gain a vantage point from where she will be able to take photos. 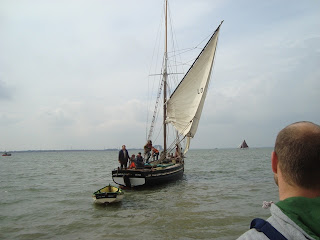 Here we have a smack with a fuller, more upright transom and less sheer than CK 21. Her mainsail does not have a boom. The tender she is towing is completely in keeping with the sort that would have been used years ago when she earned her keep. I doubt her tender is wooden one; most probably she’s a fibreglass replica smack’s boat. I can’t make out the vessel’s name, but her home port would appear to be Leigh-on-Sea. However, according to the insignia on her mainsail (LO), she would have been based at Lowestoft. 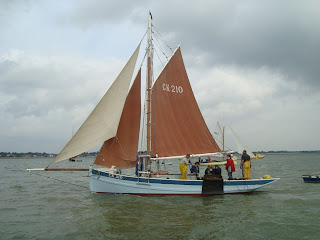 This graceful, pale blue, Colchester registered smack, CK 210, has been tastefully converted into a yacht by the addition of low profile cabin trunk. Accommodation would be sparse, but more voluminous than when she was purely a workboat. 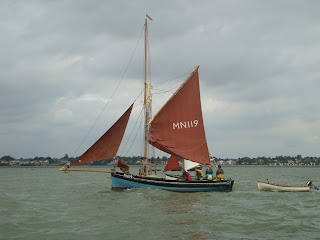 MN 119 is a clinker vessel, which is unusual for smacks. In fact, I think she looks more like a bawley. With her long topmast she would be able to carry a very large topsail.
Posted by William Serjeant at 7:33 pm