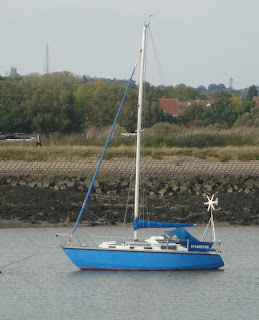 Here we have a photo of ‘Chyandour’, which I believe is a Bruce Roberts 345 - the original chine version that could be built from steel, fibreglass or wood epoxy. This one, almost certainly is a steel boat, and most likely she has a shoal draught keel. There is a fin keel version. Because of popularity and demand for the yacht, Bruce went on to develop the plans to include a radius-chine hull in steel or aluminium. 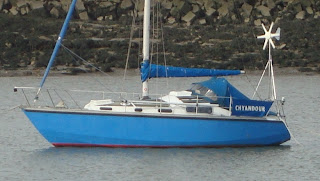 He is an extremely successful boat designer who has drawn many plans for amateur builders and professionals alike. He very cleverly provides loads of options for prospective builders, as is the case with the 345. Not only can this cruising yacht be constructed from different materials, but her owner can choose which internal layout he would prefer. Above deck he can opt for a pilot house or go for the more conventional low profile cabin trunk. The 345 can be rigged as a sloop, a cutter or a ketch. 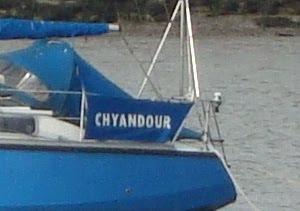 Leslie Powles, who was the 1981 yachtsman of year, circumnavigated the world three times aboard ‘Solitaire’, his Bruce Roberts 345.

"Chyandour" is from my point of view a "Sarum 28", Robert Tucker design in Aluminium.
See more on the blog of my former boat: http://cruising2summit.blogspot.fr/p/le-voilier.html.

Chyandour is the twin keel version of the Sarum 28.
Regards
Yann

This is actually my boat and she is a Sarum 28 bilge keel version. A Robert Tucker design, constructed in Aluminium. Hull number ABM24.