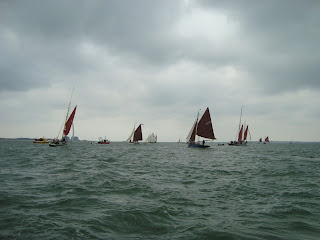 Some of the smacks

The weather held out for the on-the-water part of the Mersea Dredging Match for sailing smacks, bawleys and bumkins. Once again I had the special privilege of being aboard CK 36, ‘Electron’; this time while she participated in the dredging match. 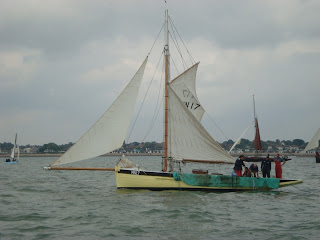 I had been warned that it could be a dirty business. Fortunately I got off lightly on account of my age. Younger, stronger, fitter ‘oystermen’ did the brunt of the work. They pulled in dredges, selected oysters, threw away rubbish and washed decks, plus worked the boat. Two members of the fairer sex did their stint too, including managing refreshments and keeping the ship tidy below. 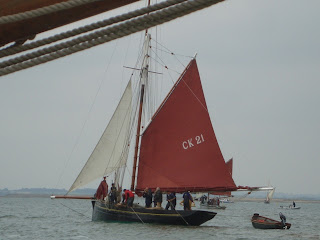 CK 21 was the lead boat that all the others were to follow after the 1100 start. Things soon got a bit ragged as boats dredged at their own pace, and they manoeuvred to find better oysters. There were one or two hairy moments when smacks came rather too close for comfort, resulting in the odd skirmish. During one encounter our skipper was hit on his ear by a muddy, flying starfish! 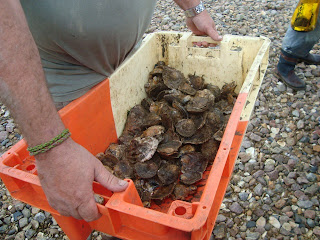 Dredging finished at 1300, and most contestants played the game by hauling in their dredges for the last time before retiring to Mersea Quarters. Assessment and weighing of the catch took place at Packing Shed Island where a crowd of people watched the proceedings and cheered those who entered the opening of oyster competition. 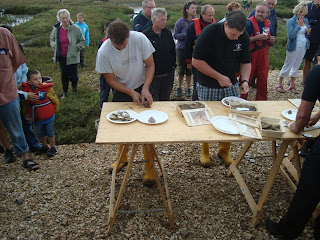 I took my departure at 1415, and our skipper kindly ferried me in his punt to West Mersea Jetty. Shortly after, there was a very heavy downpour that I hope did not dampen the party at Packing Shed Island.