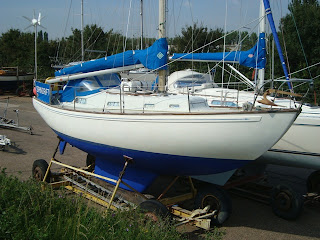 If you are looking for a sound and well-tested yacht for ocean cruising you may well consider a Rival 32. The designer, Peter Brett, has written an article for the Rival Owners Association on the history of the 32. (See link below). He mentions that at least 4 Rivals have crossed the Atlantic both ways.


The first version of the yacht was known as the Rival 31. The prototype was found to have considerable weather helm when reaching, owing to her raked rudder. Peter rectified this in the second boat and later production boats by repositioning the rudder so that it was attached to a vertical stock within the hull. The first Rival 31 was launched in 1968 and 22 of them were built.


Peter redesigned the stern by adding a short counter; this version became known as the Rival 32, of which over 200 were built. Later, he designed a longer and fuller version of the 32, the Rival 34, of which 174 were built. Owners had the option of having a deep keel at 5’ 10” or a shallower one at 4’ 8”.


History of the Rival 32 Yacht by Peter Brett the designer


Rival 32 for Sale £18,500 complete with Aries Windvane and Tiller Pilot