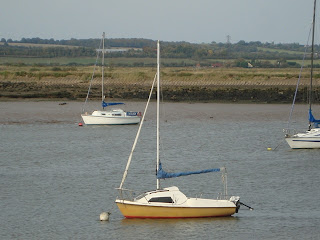 This Skipper 17 is definitely NOT a project; she would appear to be well-cared for, and the pride of her owner.

Now and again you come across an advertisement telling of a boat ‘project’. Once you see the word ‘project’, you know there is work involved. At Ebay you can sometimes find such a boat. If you have the time and the will, you can with some effort end up with a good boat without spending too much money.


Certain fibreglass boats like the Skipper 17 seem to survive for ever. They are found and restored, maybe not to their former glory, but well enough for the restorer to enjoy her or sell at a profit.


Fibreglass is virtually indestructible, which means that when a boat is left to rot, her hull remains; only items like bunk cushions, curtains and linings disintegrate. Yes, water that may accumulate in the bilges could eventually penetrate the fibreglass and weaken laminates, but much of the structure will remain. My old Hunter 19 Europa ended her life in this way; she was left derelict by her last owner at a Benfleet boatyard.


Right now there’s a ‘project’ Listang* open to bidding at Ebay.Co. UK. She’s typical of a restoration project, but whoever would take on this particular project must really desire a ‘Listang’!


I previously mentioned the Skipper 17, because she’s typical of early GRP boats that may end up in a broker’s yard without anyone caring for them. The one in the photo is most definitely looked after, because she’s the same vessel I photographed last year, occupying the same mooring, and looking every bit as if her owner cares.


Incidentally, there’s a lot of information online about Skipper 17s, including my article** about them on September 29, 2010.


**My Summary of the Skipper 17 Trailer Sailer

http://www.youtube.com/watch?v=N5SvsN9tNVo
Posted by William Serjeant at 11:09 am

Wow, great article! Thanks for sharing your experience with us. I high appreciate this post!

Thank you Shaik. I too appreciate your kind comment.