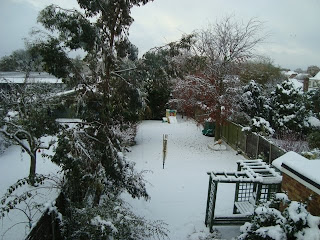 For the past few days here in Essex, England, we’ve been gloating at the plight of less fortunate people who live in the North, particularly Northumbria, where the snow has been falling almost continuously to cloak the land with a three-foot layer of countless billions of flaky white crystals. Even to the South, in Kent, there has been a generous sprinkling of the Ice Fairy’s powder. We thought we would escape, but last night the Fairy cast her spell, so that a good six inches of crispy white snow settled on the ground.


When I woke up and pulled back the curtains I was surprised to see such a wonderful scene. The back garden had been transformed from being an autumnal grotto into an arctic fairyland of sparkling, shimmering brightness. Tiny white flakes fluttering to the ground enhanced the beauty of the vision by defining depth and adding movement. Like a child who had never seen snow before, my heart beat faster at the sheer wonder of it all.


Well, you may think I’ve gone over the top, and you wouldn’t be far wrong! In fact, my heart groaned, because I had to travel ten miles by car to my daughter’s place, and afterwards make the return journey. I knew there would be chaos on the roads. Instead of taking twenty minutes to get there, I patiently drove at a snail’s pace for over an hour, while being careful not to let the car skid off the road or prang another vehicle.


I was consoled by reminding myself that I wouldn’t have been able to do any boatbuilding, not just because it was too cold, but because I had the pleasure of being with the grandchildren. The whole exercise was truly worthwhile.
Posted by William Serjeant at 2:59 pm