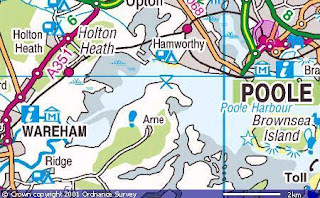 The map shows the general area of the cruise that started at Redcliffe Farm's launching slipway, Wareham, and ended at Rockley Point Sailing Centre, Hamworthy, Poole. 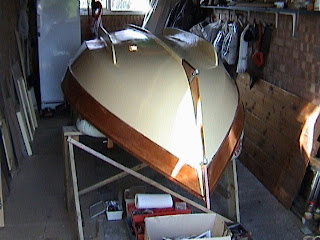 Having loaded the car with three adults, one child and myself, along with luggage for their fortnight's holiday in Florida, I started the drive to Gatwick Airport. We left home at 0430 on Saturday, 11th August, 2001. If anything, the extra weight of the passengers and their luggage improved the towing characteristics of my old, but reliable Ford Seirra.


Stars were shining brightly, but, by the time my wife and other members of the family had placed their baggage on trolleys outside the Departure Lounge, daylight had dawned and dark grey clouds were scudding across the sky. Such inhospitable clouds were to dominate the scene for the next two days. They heralded southwest winds of Force 3, and for a brief period a Force 7.


About mid-day I arrived at Redcliffe Farm's slipway where I found Liz Baker and her Cormorant dinghy. Acting in her capacity as co-ordinator of the Rally, she introduced me to Chris Heakey and his friend Doug who were about to launch their Wanderer dinghy. Other DCA members arrived by water, and I noted that their boats were heavily reefed. As I continued preparing ‘Micro’ they set off, leaving me on my own.


Half-an-hour later, the strong wind from behind helped me row along the winding River Frome towards Poole Harnour. I was surprised how many yachts were moored to a seemingly endless trot. They were tethered to a reed-fringed bank to my right-hand. Some vessels were alive with people who were enjoying themselves, partying, fishing or relaxing. Other boats were forlornly abandoned, in a state of decay. Further down the River I generally had it to myself, but occasionally yachts would overtake ‘Micro’ and others would approach from ahead. Briefly the sun shone, and at that point, I only needed the oars to steer 'Micro', as she was being driven by the wind. I tried keeping her to the right hand side of the fairway to avoid on-coming vessels - in accordance with the International Rules for the Prevention of Collisions at Sea.


I made sail as soon as I found open water at Swineham Point. There the Frome widens to reveal Gigger's Island, which is a short distance to the northeast. The storm jib pulled well, but I wanted to make quicker progress to the rendezvous at Shipstal Point,which was at least seven nautical from where I was. I needed to increase sail, and when I hoisted the reefed mainsail, 'Micro' shot off like a rocket. Almost immediately she slithered to a halt because her keels became trapped in mud. The chart showed 0.6 metres at low water springs. ‘Micro’s’ rudder had been forced off her pintles by the mud, but I did not lose it, on account of the tiller being retained by the Huntingford Helm Impeder. I had failed to safeguard the rudder by tying the retaining cord.


The wind threatened to take us further onto the mud. By downing sail quickly and rowing with all my might, I was able to very slowly move the boat into deeper water. I was taken aback with how difficult it was to maintain a course without her rudder when the wind was blowing that strongly. I had no time to ship it, because pausing to do so would have seen me back on the mud. After pulling hard for a quarter of a mile, I managed to reach a well-marked, but very narrow channel. I grabbed a starboard-hand beacon and tied a painter to it. That gave me respite and a chance to regain my strength by devouring a choc bar and drinking ginger ale. Several fast speedboats and motor yachts zoomed by. Their 'drivers' did not in the least consider the small boat that lay only a short distance from their frothing wakes.


When I was younger I would have shaken my hands in anger at them. Words befitting my indignation and irritation would have been shouted at them.
(To be continued.)
Posted by William Serjeant at 5:38 pm