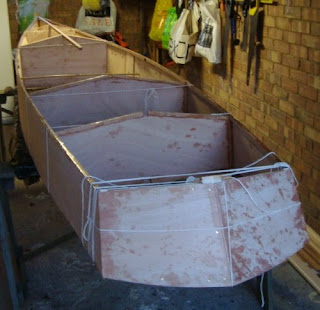 The Frames in Place

The weather forecast was right today. I was pleased that there was plenty of sunshine to counteract the cold wind. I took the opportunity to work on the boat. After five hours I had the frames held in place by screws. It took ages to do the initial measurements. Then I double checked them and treble checked them. I started by screwing the forward edge of the panels to the inner stem post, the forward top edge of which I used as a datum point for measuring the positions of the frames. Because the side panels are almost identical in shape, I could measure distances between the frames with some confidence.


Initially, each frame was slotted into position and held there with string. When I was satisfied that a frame was where it should be according the building plan, I secured it with four screws. The order in which the frames were fitted was from one to four. I judged the artificial waterline was horizontal, and used a plumb line to set the frames in their vertical position. Their transverse positions were guaranteed by taking accurate measurements from the top of the stem post.


By the time I had set frame number four in place I could see that the boat was not perfectly straight according to a line stretched between the top of the stem post and a central point on the upper edge of the transom. I believe part of the reason for this is due to the seating of the transom on the aft end of the side panels. I shall need to make very minor adjustments to the side edges of the transom cleats. Finally, I shall set diagonal braces across the hull to ensure it remains symmetrical.
Posted by William Serjeant at 8:56 pm