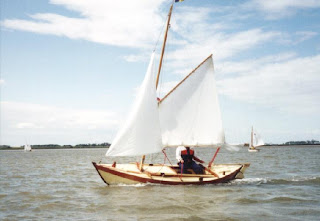 I prepared for the night by unrolling the self-inflating mattress, laying out the sleeping bag and placing the torch to the right-hand side, where my hand would naturally find it. I unzipped the bag and snuggled inside. As I lay there, I heard the sound of a yacht’s engine. She came closer and closer. Had her skipper seen ‘Micro’? At that moment I regretted not having an anchor light. I tried to justify myself by reasoning that my boat was only a stone's throw from the bank - who else would want to anchor there? Slightly anxious, I tried to imagine how I would extricate myself from the tent if the boat were to be run down.


With some relief, I realized the yacht was in the middle of the river, but then, from remarks made by her crew, I knew for sure they were about to anchor. A very dominant male skipper started bawling commands.


"Let it go now!" he loudly shouted, so that his voice could be heard above the throbbing of the engine. There was no easing of the throttle. The yacht continued on her course. "How much has gone?" he enquired.


"Better stop it there."


"Wrap it around the cleat!"


I was waiting for a cry of anguish as fingers were crushed between chain and cleat, but it never came, and I breathed a sigh of relief.


The engine stopped, and there was silence. Navigation lights were turned off, and a riding light replaced them. I had not been impressed by their manoeuvres, because the yacht had been driven beyond her anchor, so that she came up on her chain. This could have damaged her hull, and it seemed to me that they had not paid out enough warp to allow for a rise of six metres.


Retrieving my anchor was fun. A quantity of that dark, green floating weed, with small balloon-like chambers, had wrapped itself around the warp. The easiest way for me to remove the Bladder Wrack was to haul the rope over the quarter and unravel the weed bit by bit. As I did this, I fed the rope into the ship’s bucket. During the procedure, 'Micro' more or less remained stationary between opposing wind and tide. Finally, I cleaned the anchor by using a small scrubbing brush before placing the anchor with the rope in the bucket which I stowed in the forward locker.


I hoisted the jib and let it slightly draw to make way; then I set the main, making sure it had a good shape by first tensioning the throat halyard, then the peak halyard.


Thereupon, I adjusted the sheets and headed for the Branklet Spit Buoy. As I did so, I instinctively sniffed the air, because my olfactory nerves had sensed the smell of burnt stubble, which made me want to sneeze. The burning of stubble is illegal in England, but some farmers ignore the law and deliberately set fire to what remains of their crops after harvesting them. Towering billows of black smoke rise into the atmosphere, carrying large quantities of ash particles which are taken by the wind; sometimes they travel great distances before they settle, wherever that may be.


As I suspected would happen, the yacht which had arrived in the early hours of the night, had not been given sufficient scope for her anchor, causing it to brake out on the rising tide. Their yacht had drifted up river until taking hold on a shallow patch. Her crew would have been unaware of the happening. Fortunately, they came to no harm. The Cornish Shrimper that had anchored astern of ‘Micro’ was nowhere to be seen. I can only assume she must have made an early start, to take full advantage of the ebb.


Having made it over the first of the flood tide into the River Roach, on entering the Crouch, I steered a course towards Burnham. I was thankful that I was not sailing in the opposite direction, because of the piercingly bright sun that turned the waves into reflective liquid gold.


The River was mine. I was there alone. No other person was sharing that moment of nature's glory. ‘Micro’ creamed along; her white bow wave curled outwards like Father Time’s moustache, and thousands of rainbow bubbles were left in her wake. The blue sky contrasted with the dark brown of the weed-covered river bank that rushed by at an extraordinary rate. It seemed that the boat was standing still, while the world whirled towards the sun.


Oh, what joy! There was enough wind for me to sit comfortably on the port deck while playing the sails and feeling the boat through her tiller. She and I were joined together in harmony with the mechanics of countless molecules of water and air. We were integral within the formula of moving equilibrium. What a delightful sensation it was ............... the feel and balance of four dimensions; space combined with movement - far better than flying a kite, by far - even a modern stunt kite.


Just before midday, I arrived at Fambridge, and picked up a mooring. There I made coffee, relaxed, and watched the comings and goings of other waterborne craft.


Having the opportunity of perfect conditions, I played around with a few things, including adjusting the peak halyard which had taken to jamming when the sail was being lowered. I didn’t resolve the issue there and then. Later, when entering the moorings between Brandy Hole and Hullbridge, the halyard jammed again, and as the wind had increased to a Force 3, the task of getting the sail down was a bit tricky.


I had left Fambridge about 1300, so that I would have ample time for rowing a mile or so through the moorings to Hullbridge so as to arrive there well before high water at 1500.


'Would you believe it?' The wizened gent wearing the Panama hat and smoking a cigar was where he had been when we left! This time he spoke not a single word.


My cruise had been about as perfect as they come. There was nothing I could have done to prevent the pollution I witnessed, including the brown smoke that came out of the ears of the silent witness, and I was happy that ‘Micro’s’ activity had caused little detriment to Mother Nature.
Posted by William Serjeant at 9:36 pm