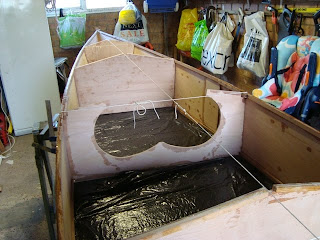 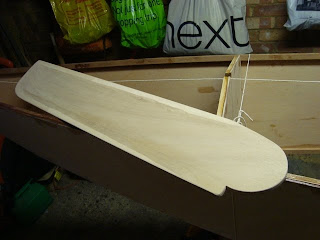 
Progress is progress! There are some days when you think you are making very little progress; today has been such a day for me. Things crop up that interfere with what you are doing. This morning I had the feeling that not much was being achieved, but when I look back on the whole day, far more was achieved than at first I thought would be the case.


As I had to go near the factory where I’m hoping the metal parts for ‘Sharpy’ will be made, I thought I would call in to check how far they had advanced with a quote. Over the past three weeks I’ve been badgering them in a restrained way to get a move on. In total I’ve made three phone calls, sent an email and I’ve been to the factory twice. I was promised a phone call by the end of today, but as has happened before, I did not receive one. I have my doubts if they want the job. If they don’t, why aren’t they straight with me? I could try elsewhere.


About midmorning I set about tidying the keel box support frame by filing and sanding the edges where epoxy had seeped out from between the lamination. Then I fixed it in place between the hull panels. All of the frames have now been made; they simply need to be epoxied to the side panels, along with the transom and inner stem post to make a rigid framework for the rest of the hull. The bottom and deck panels will be shaped accordingly.


I needed to order epoxy and a length of Douglas fir for the boom, so at mid-day I took a break from woodworking to go online.


After lunch I made the rudder blade. The more complicated bit to build is the rudder stock which houses the kick-up rudder. I may be able to start that tomorrow afternoon. The reason I am doing things piecemeal is because I have not yet sorted out the heating for the garage. Once that’s been done, I’ll be able to make real progress.
Posted by William Serjeant at 8:23 pm