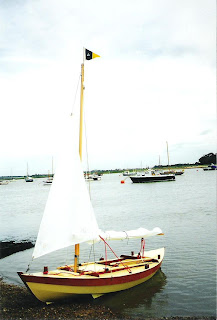 'Micro' and the Deben


Straight away I prepared the evening meal. As I did so, I couldn’t fail to notice that something special was going on at the Yacht Club. Banners and balloons indicated that there was to be a party for someone’s 40th birthday. Loads of young people in fancy dress gathered on the balcony. Drinks were distributed and merriment began.


"Should I try to find another spot for the night?" I asked myself. "No. It'll be alright. They'll have gone home by midnight," or so I thought. I rigged my boom tent.


Dark clouds gave warning of approaching showers, but they didn’t put me off from having a short walk beside the River. There was a marked drop in temperature and a smattering of rain. I wasn’t concerned about getting wet, because I knew my oilskins would keep me dry.


During my walk I saw two things that were of interest; they were an old Catalac catamaran, moored by the river bank, and a very large mansion that overlooked the Deben. The former was noticeable because of her derelict state, and the latter stood out on account of being brand new. I pondered why their respective owners had wanted them in the first place. Maybe the owner of the mansion had inherited a windfall, and wanted to invest it in property? Perhaps the owner of the catamaran had intended to use his yacht for blue water cruising, but misfortune came his way, so that he could not fulfil his dream? Instead he gave up the idea, and lost interest in his yacht.


On arriving back at the boat I found the birthday party was in full swing. I retired to my tent in the nick of time to avoid a torrential downpour. Very loud music – more accurately low frequency booming sounds from bass woofers - utterly destroyed what would have been a peaceful evening. There was no call of the curlew, no honk of a heron, or the soothing laughter of lapping water as the ebb tide receded. All wildlife had fled the scene.


Had I known the event was to take place I would never have ventured within ten miles of Waldringfield! Partying revellers added to the cacophony by shouting and shrieking. At midnight, youngsters, some of them nude, ran around the beach, oblivious to injuries they may have sustained from stones or broken glass. Several of these uninhibited, intoxicated partygoers dashed into the water, where they squealed and shouted obscenities. Those who did not avail themselves of the aquatic activity continued running around the beach, including doing circuits of 'Micro'. I was glad I had not set an anchor, because they would surely have tripped over its line or fallen foul of the flukes.


It wasn't until about three in the morning that any semblance of peace returned to the otherwise idyllic location. I fitfully slumbered. About two hours later I awoke from a jumbled dream that made no sense to my befuddled mind. At the faint light of dawn, my nightmare came to an end. Relieved, I took down the tent and prepared breakfast. I didn’t feel like shaving and smartening myself, but as the public toilets were only a few yards away, I persuaded myself to make the effort. Hot water was freely available, and soon the stubble on my chin was gone. Through bleary eyes and a steamed-up metal mirror I saw a ghoulish face quizzically looking at me.


By the time I got the boat sailing, there was a fresh wind - a Force 3 from the southeast, which meant I would have to battle against wind and tide if I were to reach Ramsholt, the rendezvous where members were to meet Paul Constantine, the coordinator of the Rally. Sure enough, I found him aboard his anchored Torch dinghy which was fitted with a well-designed tent that had flexible windows and a canvas door. His wife’s Mirror was rafted alongside. She was about to sail to Felixstowe Ferry Slipway where she had arranged to meet two friends who were new to sailing. I decided to make my way to the slipway too.


I arrived at least a quarter-of-an-hour before her, and greeted George Saffrey who was rigging his beloved Cruz dinghy. We renewed acquaintances; then I introduced myself to a couple whom I mistakenly thought were the sailing tyros waiting for Paul’s wife. They explained that they were spectators curious as to what was going on.


As I was helping George launch his Cruz, Paul’s wife arrived. We chatted and took photographs of our boats; then we discussed the practicalities of sailing up river to join Paul. Would there be enough wind for us to make against the ebb? Paul’s wife was the first to give it a go. Encouraged by her progress, I followed, and George took up the rear. When we found Paul, we collectively agreed it would not be prudent to go to sea; instead we sailed up river.


The wind increased, which required me to reef the mainsail. Gusty conditions kept me pretty busy. Now and again 'Micro' would heel alarmingly and there was one occasion when I felt she would go completely over, but, to my relief, she righted herself. George picked up a mooring at Ramsholt and I rafted 'Micro' beside his Cruz. We ate lunch together, and we talked of sailing and of boats - surprise, surprise!


After lunch we looked for the others and found them near the Felixstowe Ferry Slipway. David Jennings had joined them with his Highlander 14, which went surprisingly well, despite the fact that she was rigged with a deeply reefed standing lugsail. Paul suggested that we should retrace our steps. By that time the tide was in our favour. We could rendezvous at 'The Rocks’, which is a sheltered nook by Shottisham Woods. The anchorage there is popular because of the protection afforded by a bluff of land, and access to the shore is good.


The wind blew even harder, but I couldn’t reef ‘Micro’ any more, which meant she was overpowered. Under those conditions, the others could out-sail my shallow draught boat to windward, but she left them standing when reaching or running. The gusty wind veered to the northwest, causing us to beat through the Ramsholt moorings. I ran into difficulties while trying to avoid a moored yacht. 'Micro' failed to complete her tack, and she fell into irons, causing the top of her stem post to be forced against the yacht's topside. As I tried to fend her off, I saw the capping piece split under the load. Slowly we slipped astern until we were free. Fortunately, there had been no perceptible damage to the other vessel. I felt a sense of relief that I had got away with it so lightly.


I decided there and then to abandon the Rally and to head for home. Although I really wanted to join the others that night, I felt things were not going well, because the boat was being overpowered by the gusts. Furthermore, I was due to start a month's cruise aboard a friend’s yacht on Monday. I asked George if he would inform the others of my decision and to wish them well.


I played it safe on my way to the Slipway by using the jib alone, except for the last stretch when I also set the reefed mainsail.


The main lesson I learnt from the cruise was that I needed to find a way of reducing sail more than I had been able to. Subsequently I bought a storm jib which made all the difference when sailing in winds of Force 3 and above.


The Deben Cruise had been an interesting experience, but it had not been entirely satisfactory because of the unpleasant episode at Waldringfield Yacht Club and because of my disappointment at having to abandon the cruise.
Posted by William Serjeant at 9:54 pm

I'm intrigued by your boat "Micro" and would love to know more about some of the modifications you've made to her. I've been very brash, and brought attention to your blog by posting about it on the Wooden Boat Forum, which you can find at http://forum.woodenboat.com

in the "People and Places" section.