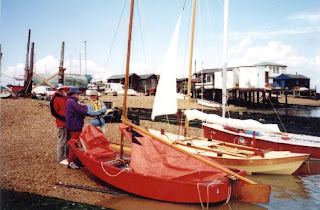 
Attending a DCA rally would allow me to compare 'Micro's' performance with similar dinghies; therefore I was keen to meet members with their boat at the Deben gathering over the weekend of 30th June to 1st July, 2001.


The Met Office accurately forecasted that the weather would be sunny, but there would be a blustery wind.


I left home shortly after mid-day on Friday, 29th July, expecting to spend at least two days and two nights aboard ‘Micro’. High water at Felixstowe was to be at 1918.


On arriving at Felixstowe Ferry Slipway at about 1400, I observed there was ample water to launch the boat. A notice at the head of the slipway indicated that a fee should be paid by those using the facility, but when I enquired at a local café about payment I was told that boats without engines were exempt and that car parking was free. I made haste to launch 'Micro'.


Apart from a crowded ferry boat at the foot of the slipway, there was nothing to prevent me from the launching ‘Micro’. The tide was belting up-river, so that ‘Micro’ was whisked northwards through the moorings to the west of Horse Sands. Since it was time for a late afternoon tea I grabbed a vacant mooring so that I could make a brew.


The sun was shining and I had the River Deben to myself. Suitably relaxed, I sipped the refreshing beverage and savoured McVities biscuits. I surveyed the scene, and I was taken by the beauty of the place. To the south, beyond moored yachts, there was a high bank of shingle which did not completely obscure the boatyard buildings. To the east, on the opposite side of the River, there was a small wooded hamlet. The area was unspoiled and picturesque. On either side of the moorings to the east and west, there were low-lying fields. To the north there were the muddy banks of the meandering River.


I noted from the chart that the distance between Felixstowe Ferry and Woodbridge was about nine nautical miles. This was the extent of the cruising ground I could explore, which was no more than three hours sailing in either direction – unless I was impeded by the tide or lack of wind. After my snack I made sail.


My next point of interest was the moorings off the Ramsholt Arms pub, which is a favourite rendezvous for DCA sailors. Many a pint has been downed there while they told their tales of adventure. I was reliably informed that the Pub’s food was good, but have not tried it for myself. I carefully examined the sandy beach by the jetty to ascertain if it would be a suitable spot for ‘Micro’ to take the ground. I needed to find a level place, but this was too steep.


By then the wind had almost petered out, so that the boat crawled at a snail's pace.


Where was I to spend the night? As I had not slept aboard 'Micro' while she lay on terra firma I was keen to find a level beach. I wanted a clean, fairly hard surface on which my boat could settle. That would enable me to come and go without bringing mud into the boat. It was my custom to take a walk after my evening meal and I didn't want the hassle of cleaning wellington boots.


Two hours before high water I found what I thought would be a suitable spot at Waldringfield. I nudged ‘Micro’s’ bow onto an area of golden sand near the Yacht Club. To all intents and purposes, this looked perfect. I unshipped the rudder and pointed the bow towards deep water, so that when she dried out, my head would be higher than my feet.
Posted by William Serjeant at 12:54 pm