More Messing About with ‘Pike’ 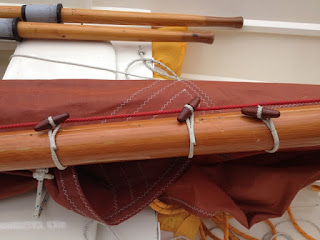 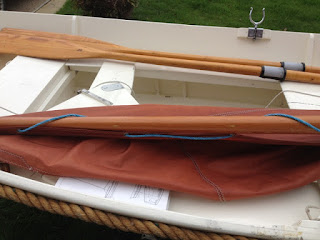 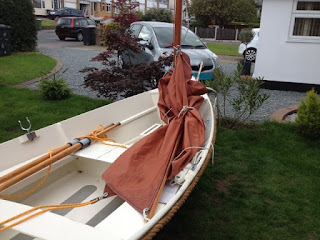 Once again I find myself undoing what a previous owner did with ‘Pike’. Perhaps the biggest mistake he made was attaching the luff of the sail to the mast with toggle cords. They were all identical in length, but the mast was tapered; hence the upper part of the luff sagged away from the mast, especially when tension was placed on the sprit snotter. Another disadvantage of a toggle system became obvious when I tried to reef the sail. As it was lowered, some of the toggle cords had to be undone to enable them to pass over the snotter fairlead, then they had to be done up again.

The traditional single luff cord passing through cringles is far superior, because to lower the sail for reefing, one simply eases the snotter and the halyard. After the reef is tied, they are re-tensioned. Because the reef is rolled in the form of a sausage, the sheet becomes twisted. To untwist it you disengage the clew block that is attached to the clew cringle with a snap hook, then hook the block back on again. The sail is reefed, and you are ready to go!

Another advantage of the single luff cord is being able to lower the sail into the boat where it can be lashed securely around the sprit.

Posted by William Serjeant at 9:27 pm