Had a Brilliant Sail with ‘Pike’ – Part 2 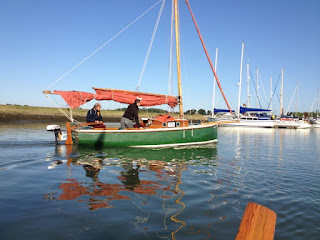 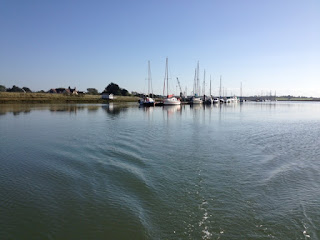 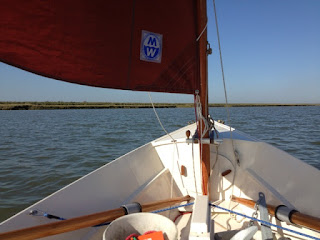 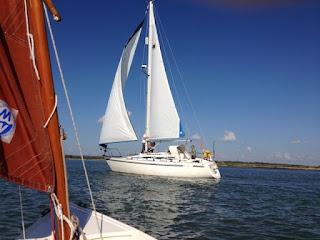 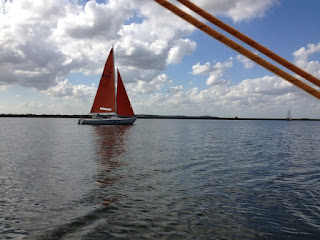 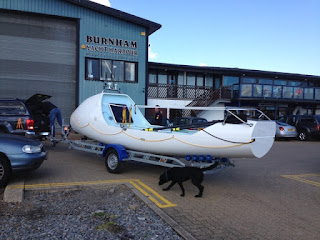 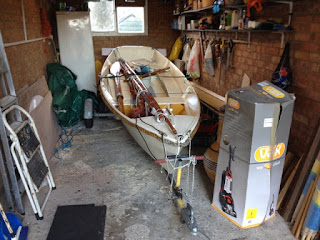 'Pike' being put to bed in her boathouse

When it comes to having a sail, good weather makes a big difference. Yesterday’s was perfect, and the most important aspect was the character of the wind – its direction and speed. The wind was generally from the north and never more than a Force 2, which was ideal for exploring Bridgemarsh Creek, a backwater where I seldom sail, on account of it being shallow and because the prevailing wind is from the SW. It is best done when the tide is making, so that if the boat gets stuck on the mud she will float free.

Burnham high water was at 1140, and by arriving at the eastern entrance of the creek at 1015 I had ample time for a leisurely sail to the exit at the other end before the ebb. The flood tide enters at the eastern end, and on approaching the creek I felt the speed of water increase. ‘Pike’ was being lee-bowed into the narrow orifice from where I could see the masts of yachts poking up above the muddy bank of Bridgemarsh Island.

I was amazed at how quiet it was - the only sound I could hear was that of tiny wavelets slapping ‘Pike’s’ bow. These happy, chuckling notes, resonated by her bow chamber, lifted my soul; as did the dancing peak of her tanned sail that jigged to and fro before an infinite, azure, cloudless sky. Around the corner, two scruffy buoys marked the channel, and there ahead lay many yachts berthed at pontoons that straddled the creek. Uncertain if they were linked to the northern shore by walkways, I chose to glide through a gap to the south of them. I wove a course between clumps of motionless weed floating on the surface, and I occasionally glanced astern to see if any had lodged on the rudder.

This was an adventure. Having no chart and no GPS, it was back to basics. Deeper water was generally to be found closer to steep-sided banks, but I came to a point near the end of the creek where there appeared to be an island, one that I could not remember being there on previous excursions. To starboard and beyond it, I could see a high bank along which runs a footpath from North Fambridge Yacht Station to Bridgemarsh Marina. A choice had to made, which side of the island to go, and I chose the wider stretch of water to the SW, beyond which I could see what looked like the exit leading to the Crouch.

Once again, back on the river, I was free to take a break and to have an early lunch. I brailed the sail and left ‘Pike’ to her own devices. She very slowly drifted towards the Fambridge moorings while I relaxed, munched and took in the many comings and goings of yachts and motorboats. I was reminded that it was a Saturday, and like me, all of us were there seeking what pleasure we could find. Therefore I could not grumble when my little boat was tossed like a cork on the wakes of gin palaces, of which there were several, seemingly taking part in manoeuvres resembling a naval exercise. They proceeded down river in convoy to a distant buoy and returned to the Fambridge moorings.

As I made sail and got under way for Burnham Yacht Harbour the wind veered, causing ‘Pike’ to be close-hauled, but the sailing was delightful. I lay on the floor of the boat with my feet facing forwards elevated on the thwart; I held the tiller with my raised right hand and the sheet in my left. I felt the wind on my cheek, inhaled the fragrant air and thanked God for His love and kindness to me.

Back at the Yacht Harbour I skipped past the queue of motor yachts waiting for fuel, and the boat came to a gentle halt at the slime-covered slipway, the tide having fallen several feet. Getting ‘Pike’ on her trolley past the green sludge without sliding and landing on my backside required patience and tiny steps taken with caution.

Just before leaving the Yacht Harbour for the journey home, I had the privilege of meeting Charlie Pitcher who was there helping someone launch a two man rowing boat manufactured at Charlie’s yard.

Hello Bill, you had a wonderful day by any account. It seems to me that Pike is an ideal day sailer. I wish you both many more happy days out.

I hope things are going well with you and that you are enjoying sailing with 'Minnow'.

Great to hear Pike is working well, last weekend was perfect for sailing.