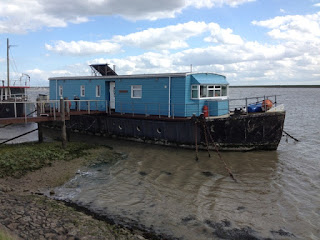 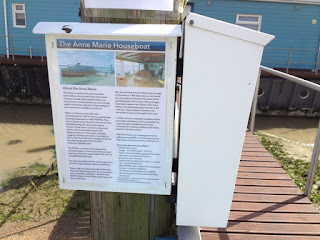 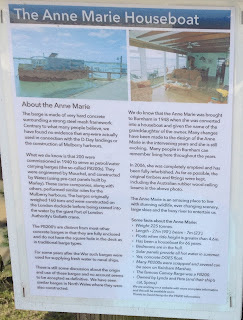 There are a number of houseboats at Burnham-on-Crouch, each with unique histories, for none of them are identical and most were built for different purposes; some are ex-motor or sailing yachts, Dutch barges, canal boats, Mulberries, and there’s Anne Marie, a PB200. Formed from pre-cast concrete panels in 1940, along with about 200 other PB200s, she was commissioned for the purpose of transporting petrol/water from shore to ship in the Second World War.  She was brought to Burnham in 1948 where she was transformed into a houseboat, and she has performed that function until today. Berthed at West Quay, she is not far from the Yacht Harbour. At the other end of the quay there’s ‘Mulberry’, the subject of a previous article.*

I would love to live like this with my little yacht tied up outside. I think the Mulberry houseboat in one of your previous posts could never ever be mistaken for anything but a 'House' and a 'Boat' !!

Owners of Mulberry and Anne Marie have yachts moored to pontoons alongside their houseboats.

For better or worse... I have just bought a pb200 houseboat! So am really pleased to see another one!
I would love to find out more about the history of these barges when they were serving in WW2, do you have any links or info you could share?