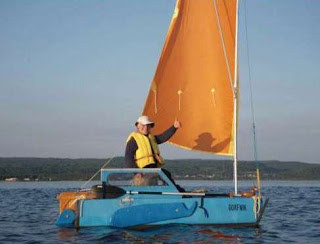 Paul who has on several occasions contributed to the comments section of this blog sent me an email with information about a very small Puddle Duck-type sailing cruiser designed for protected waters. I thought I would share the details:

André-François Bourbeau who lives at Saguenay, Québec, came up with the idea of making his own Paraduck based on a modified Puddle Duck Racer.* She is fully enclosed with sitting headroom, having a similar but smaller cabin to that of Matt Layden’s Paradox, of which André-François is an owner and builder. Unlike a Paradox, ‘Gorfnik’, weighs about 200 lbs, as opposed to 1,410 lbs, allowing her to be launched from a dinghy trolley, which means she can go where a Paradox can’t on account of requiring a slipway with vehicle access.

Bearing in mind the limitations of such a boat, ‘Gorfnik’ looks like a load of fun, both to build and to sail. This is not an endorsement or a recommendation, but if I was not already a boat owner I would consider having a go at building one and sailing her.

I would add the caveat that any choices you make are entirely up to you, and I can take no responsibility for your decisions and actions.

Posted by William Serjeant at 9:56 pm

Ocean Explorer is similar http://www.duckworksbbs.com/plans/korhonen/ocean_explorer/index.htm there is a 12' Goose version as well.

Thank you for the links.

I did a folow-up on Thursday 17th Sep.