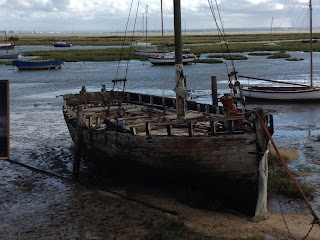 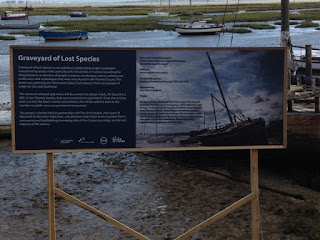 At Leigh-on-Sea, close to Belton Way Small Craft Club*, I saw what appeared to be a rotting bawley, and sure enough that’s what she was. A large notice informed me that she was the ‘Souvenir’, a 40’ Thames Bawley and that she had been recovered from Leigh Marsh to be a principal feature in a project with the theme and title, ‘Graveyard of Lost Species’. This involves the recording and preservation of things and happenings from the past in and around Leigh-on-Sea and neighbouring Southend-on-Sea. The subject matter encompasses people, creatures, landscapes, events, architecture, professions and mythology that were once found in the locality of the Thames Estuary.

The project is being led by YoHa, partnered with The Arts Catylist. (See links below to their websites.)

Some of the stuff they seem to be doing seems nonsensical to me, but part of it comes under the heading of artistic expression and creativity. The laser cutting of text subject headings representative of what is discovered about the past into the planking of the wreck before re-floating and returning ‘Souvenir’ to her graveyard, just doesn’t register with me. Who is going to see her and the engravings when she is back on the marsh? And who is going to care? She’ll just rot and be lost for ever. Maybe that is the point? She will become the ‘Graveyard of Lost Species’, the species of which will not have been lost, because images and sound-bites of the past will have been preserved in new archives, recorded by electronic means and placed forever into the memory bank of Cloud.**

I would prefer to have seen a restoration and preservation project, whereby ‘Souvenir’ would have been bought back to life, used and maintained as a hands-on example of a Thames bawley, similar to nearby ‘Endeavour’, a Leigh Cockle bawley.

I agree that renovation and restoration of boats that are an important part of Englands maritime history is the best option. But I guess it all comes down to money.

I hope that part of preserving information / photographs in that 'Cloud' thingie someone thinks to take off a set of her lines for posterity (who knows somewhere down the line a new replica Bawley might be built. Shouldn't be too big a job for a knowledgable boat builder.

So many councils on that list, but the money could be better served on more important services helping the needy and poor.

Such a waste of money and of a lovely vessel.