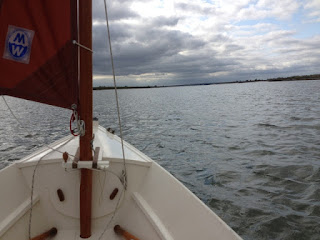 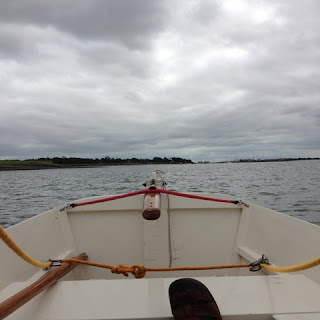 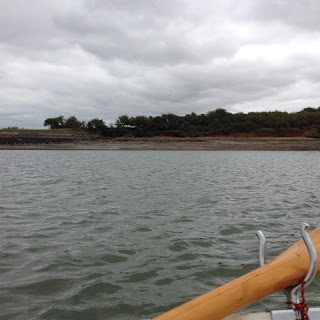 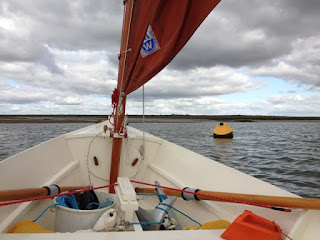 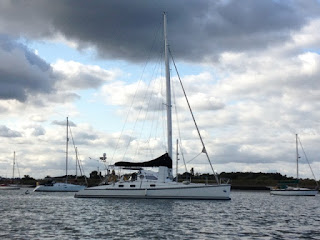 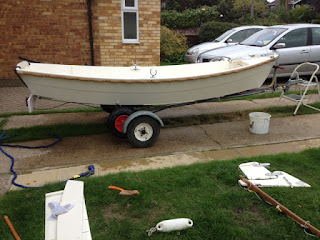 Altogether I was on the water for ten hours, not all of them sailing or rowing. I took two breaks, the first at anchor off Cliff Reach and the second tied to a buoy near the western entrance of Bridgemarsh Creek.

Shortly after setting out from the slipway at Hullbridge I noticed what appeared to be a long piece of string trailing from the rudder. This turned out to be a crab bait line, probably lost by some unfortunate child, who like many others gather at the end of the Up River Yacht Club’s slipway for a bit of sport, catching as many crabs as possible, before throwing them back into the water.

Apart from the crab line incident there was an event that could have been very significant. The wind was generally light, but as clouds began to appear, the wind became puffy. A stronger puff than the others heeled ‘Pike’ to a point where she was about to take water over her side. I was able to spill wind from the sail to bring the boat onto a more even keel. At the time, I was midway along Longpole Reach, which is a stretch of water to the east of Fambridge. Not many people walk the banks that far from Fambridge, and had ‘Pike’ capsized I doubt anyone would have seen me struggling in the water attempting to right her.

I had worked out a passage plan considering the possibility of capsizing. As a safety precaution I carried a whistle, and wore a buoyancy aid. In truth, a whistle may not have been of much use, but on returning to the same stretch of water later that day, I saw a man seated on the north bank who could have been birdwatching. (During the sail I saw two flocks of geese, many plovers and several lone egrets.) At the outset, I had my doubts about being able to recover the boat after capsizing, and yet I took the risk. Needless to say, I became more vigilant after the event.

Except for the happenings described, nothing else of note occurred. I sailed as far as Burnham Yacht Harbour and back to Cliff Reach where I anchored and had lunch. Later I made my way to the easternmost buoy of the Fambridge moorings for a nap while waiting for the water to become high enough for me retrieve the boat at Hullbridge. I chose to row the last 3 ¼ miles for a bit of exercise.

The new sheeting points are good, but I do not have enough strength to pull the sheets really taught for long periods. I may have to revert to the previous single sheet system, despite its drawbacks.

Sailing ‘Pike’ on the River Crouch in more than a Force 3 would be too much for me. This definitely limits what I can do with her.

Posted by William Serjeant at 10:22 pm

There is nothing wrong with Force 3 - good little sailing breeze.
From your photos I am counting 2 yellow buoyancy bags under the forward seat (plus the buoyancy of the little bow locker) and one under the stern seat (although I can't see it in this latest photo).

Despite your dislike of altering a designers wisdom, and being myself a congenital tinkerer (and despite your protests about changing stuff I suspect you are also LOL) I would be inclined to enclose the stern seat area making it into a buoyancy chamber and also do the same with the seat in the bow of the boat. If you were to then capsize, your little ship would probably float with the gunwales low enough to clamber aboard and with enough buoyancy for Pike to hold your weight as you bail with a plastic bucket. As you well know these little chambers make an excellent water proof storage area for a sailors lunch.

Hello Bill, Im overjoyed that you had a lovely day. Obviously, Pike is fairly easily propelled by oars. It seems to me that she may be a tad over canvassed, which will account for her tenderness? Your safety precautions are very well thought out. I wouldnt worry too much about anyone hearing you, sound does carry incredibly well over water.

Hi Bill, Glad to hear you had a good day. It's annoying to have a rope horse which sometimes drapes itself across the tiller, but I suppose one can get used to it. In some dinghy classes, including Wayfarers, this arrangement seems to be the preferred solution. Personally I dislike it, but the alternative, a steel horse, might make shipping the rudder difficult, and a boomless rig rules out most other choices.

If you do revert to the old mainsheet arrangement I suggest you invest in a ratchet block to help you hold on to the sheet for long periods. Low friction blocks may be great for racers, but there's nothing as welcome as some help gripping a thin rope sheet.

Perhaps ratchet blocks, or even better auto-ratchet blocks would help. The use of a good auto ratchet on the mainsheet has help a number of my friends cope with mainsheet loads. Of course your current system has no purchase either, so a single mainsheet with purchase and a ratchet will,make a huge difference.
Good to read if you out so long Bill enjoying all the life of the salt marshes.
Brian

"I do not have enough strength to pull the sheets really taught for long periods." Could you put in a cam cleat to hold it once you get required tension.... I got some for Sparrow this year that sit on a swivel base...


Many thanks to all of you.

A small ratchet block may work. I'll give it some thought.

Meanwhile I will try a single block at the clew and a single becket block on a rope horse.

Hi Bill, Just curious. What's that line (red) that runs across the boat, from a hook or shackle on the starboard sheerstrake, around the front of the daggerboard, to a point somewhere on the other side of the boat?

Is it a restraint to help keep the daggerboard down? If so, wouldn't a short length of shockcord fixed either side of the c/b case do the job?

All the best
Patrick

You are correct; the bungee allows the daggerboard to be restrained at multiple settings. I had observed there were small hooks either side of the boat and a bungee wrapped around the daggerboard. The idea occurred to me that combined, they could be for that purpose. In practice it works well.