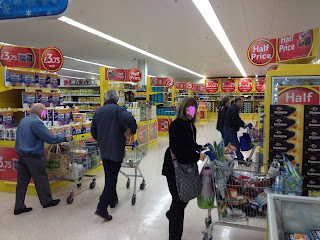 
Likewise, monetary inflation is a serious business. As prices rise we find we have less in our pockets for those things that are not essential, and for some, they have none left over, or even find themselves going short because they can’t buy essentials. As prices increase, the value of money decreases. When I was a kid, I could buy a foot length of black, sticky liquorice for a penny. I can remember handling farthings, which were worth one fourth of a penny. I could buy a couple of Gobstoppers for a farthing.  There were threepenny bits, sixpences, shillings and half-crowns. Until 1984 there were pound notes. 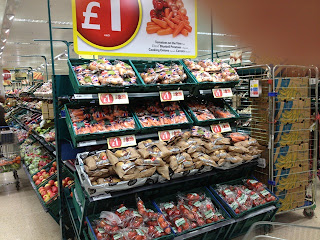 On 15th February, 1971 the calamitous day of decimalisation arrived, and in one fell swoop the value of money plummeted. Since then there has been a steady decline; indeed of late, there has been a rapid decline. I believe part of the problem is that there has been a tendency  for retail outlets to round up prices; for example, instead of an item being £1.43, allowing for a fair profit margin, it is labelled at £1.50.
Over the last month or so, I have noticed TESCO has been offering packed vegetables at £1 per packet. This is marketing as per the Pound Shop, but with different produce. What you lose on one item you gain on another - buy in bulk and sell with marginal profit on each item, but sell large numbers. If you can’t beat 'em, join 'em! Maybe these packed vegetables are value for money – give away here, but take away elsewhere. Another tendency has been to package goods together in an effort to sell more. Instead of pricing these packages at say £1.57, they are priced at £2.00. Typically where items are lumped together their prices follow a code: £1.00, £1.50, £1.75, £2.00 or £3.00, even £5.00, but never £3.21 or 73p or £4.31. The smallest fraction of a £1 reflected in these so-called value packs is 1/4, i.e., 25p. What’s happened to the one pence piece? The 99p Shop has them all, for giving change! The customer puts them in his piggy bank, because they are of no value to him unless hundreds are saved. 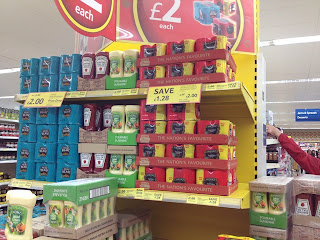 In time, perhaps shorter than we might think, the smallest denomination of coinage will be £1. Let’s face it; can we buy anything for 5p? Thinking about it, what can we get for 20p? These are uncomfortable times, but there is a glimmer of hope: Inflation fell in September.*
I’ll take a couple of Aspirins to reduce the pain.


Coins of England and Great Britain

Sounds like I've found the perfect choice for you 20p then...

PS. Can you remember the unimaginable joy of getting a brown ten shilling note for your birthday?!

Brilliant! I'll go straight away to TESCO for my panacea. They will need to give me a penny change from my 20p piece.

When they say inflation is "falling", it just means prices are rising, but slightly more slowly than they were in the previous month.

Today I received a letter informing me of the pension from my first job. I can start to draw it from next March. It will be a princely £217 per year!

Actually that's not bad. I seem to remember my salary there was £500 a year to start, and I was there for about 6 years.

God smiles on you Patrick. He surely looks after you - not that you didn't work for your pension and deserve every penny.