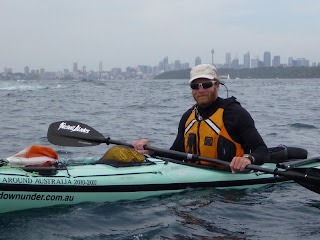 Stuart was brought up in England at Frisby on the Wreake, near Leiscester. Being an outdoor enthusiast he took up rock climbing and mountaineering. He moved to Australia in 1987 where he continued his sport, but arthritis of the knees caused him to look for a challenging alternative. Having read a book by Paul Caffyn who kayaked around Australia in 1983, he decided to take up kayaking. Always looking for personal challenges he thought he would have a go at emulating Caffyn, but his venture would be low-key, and self-financed. Married, with two children, this 16 month adventure would be a big undertaking.


There were enormous difficulties to overcome. He chose a Nadgee solo kayak, Wilderness Wear thermals and clothing, and a Sea to Summit Dart 2 tent to see him through the 16,000 kilometres of paddling. Taking an anticlockwise route, he left Broome, North-western Western Australia, on 10th April, 2010. His first day was almost his last, because he suffered badly from heat exhaustion while paddling 40 kilometres in 50 degrees heat. Ahead of him there were three very challenging stretches of coastline comprised of high cliffs, each requiring him to paddle for many hours; along one stretch he kept going for 30 hours before he could take respite ashore. 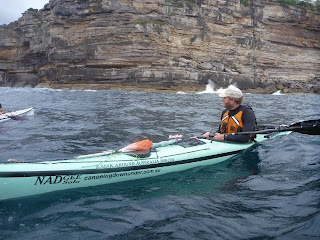 After arriving back at Broome on 28th July, 2011, where there were no more than a hundred people to greet him. Stuart was very unassuming of his achievement. He had sought no publicity; all he wanted was to see the whole coastline of Australia and to fulfil his dream. He had some tense moments, such as when a Tiger Shark bit off the rudder of his kayak, and when he was thrown out his kayak when approaching a beach through surf. At one time crocodiles surround him.  Altogether he was capsized five times because of heavy seas or sudden gusts of wind.  When asked about his remarkable achievement he praised his wife for her support and for the spontaneous help people had given him on the way. His chief concern was getting back to work and to live a normal life. There was little to say about himself.


Frisby on the Wreake

Posted by William Serjeant at 1:11 pm