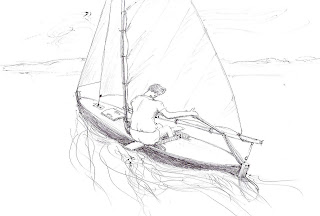 My Shortened Scout Kayak under Sail
I have just heard, via ‘In the Boatshed.Net’ (See link below) that Percy Blandford has reached his 100th birthday! Congratulations to him.


Between 1955 and 1957 I was a National Service conscript serving in the Royal Artillery at a unit near Rhyl, North Wales. You can read an account of the conditions and my reactions to them by going to this link: http://bills-log.blogspot.co.uk/2009/09/national-service.html


For me, it was not a particularly happy time, but I learned valuable lessons. The best part of being stationed at Rhyl was that I could paddle my PBK 15* kayak on the sea at weekends. The Commanding Officer gave me permission to use the woodworking facilities at the camp for building my kayak. She was built from the very best materials and lasted for over 20 years; most of that time she was owned by a good friend who paddled her frequently on the sea at Torquay. He also took her on camping trips exploring English rivers.


The very first kayak I built was a Shortened Scout Kayak.**


*I believe Percy Blandford’s PBK 15 plans are no longer available, but plans of a similar kayak are available at Clark Craft.  This is very similar; in fact it may be identical:


In the Boatshed.Net ‘Percy Blandford is 100 tomorrow!’


Plans for Short Touring 11 (I particularly like this one.)