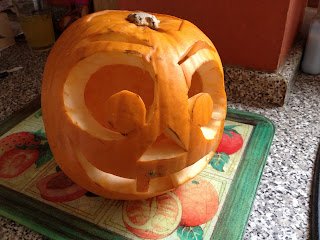 There is nothing I can say about Halloween that will possibly make a scrap of difference, but that doesn’t stop me giving vent to my feelings. In fact, I shall feel a lot better for it.


From previous posts at this time of year, you’ll gather I don’t like Halloween. Back in the 1950s nothing was heard about it – Guy Fawkes and fireworks, Yes, and burning of the guys, Yes. Kids would create their own and bring them to the communal fire at the village green. There would be a few fireworks and jacket potatoes, plus a huge amount of messing about and banter, all enjoyed by the children and their parents. By ten o’clock, the village would be quiet, most youngsters snugly asleep in their beds.


Today, it’s totally different - fireworks go off every evening for a week or so either side of 5th November. In addition we now have Halloween on 31st November. Both events are highly publicised by those who want to make fortunes from selling items for them. The US National Retail Federation estimates 2.5 billion dollars will be spent this year on Halloween costumes alone! There’s a similar trend in the UK. Even adults dress up, have parties, gorge themselves and binge drink. Unwittingly, many parents think it’s not bad to let their young impressionable kids dress up as witches, wizards, Frankenstein monsters, ghosts, zombies or ghouls and encourage them to attend parties centred around dark and sinister themes; those of horror, frightening spirits, demons, devils, vampires, bats, spiders, toads and the contents of witches cauldrons, spells, killings and death, torture and the underworld. Maybe this is hyperbole, but I think you get my point.


Parents can so easily be caught up with the ‘spirit’ of Halloween, not wanting their kids to lose out. Their desire is for them to engage in the same activities as their neighbours’ kids. Groups of children, some supervised, roam around the streets knocking at doors, playing trick or treat, not realizing they frighten frail old folk, wake up babies and disturb domestic pets. Where I live, one or two trendsetters decorate the exteriors of their properties, just as they do at Christmas, but at Halloween they adorn them with spooky ghosts, skeletons, cobwebs, spiders, witches and caldrons. 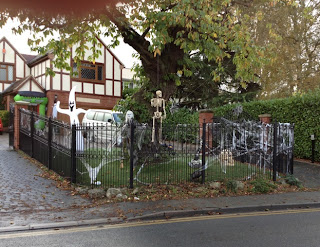 I’m not a killjoy who doesn’t want kids to have fun, but I would prefer to see them enjoying wholesome alternatives, such as taking part in creative activities under the supervision of their parents, youth leaders or teachers. Responsible adults could organise a mask making party, arrange a cup cake decorating evening, run a themed dressing up party, or have a time for singing and listening to music, or a story telling evening.  According to their age, youngsters could make Christmas cards, Christmas decorations, or be shown how to crochet or knit.  Failing all else, they could play ordinary party games, with an incentive that at the end there would be a treasure hunt for hidden goodies, chocolates and sweets. There must be a thousand and one more engaging, constructive activities for children to do on Halloween than delve into dark and morbid things.

Should Christians Participate in Halloween?

Posted by William Serjeant at 9:47 pm

Bill, I sympathise with what you say but lets not forget that Halloween is All-Hallows'-Eve which is the night-before-All-Saints'- Day.

And a celebration much like our Halloween, with bonfires and feasting on apples and nuts and harvest fruits, was part of pagan worship for centuries.

Like you I'm not comfortable with the commercialisation of the day, but the association with the dead isn't perhaps something we should reject - for example in Mexico the day of the dead is a very real and glad celebration

All good points. Thanks for your input.

A lot depends on where one is coming from. It's a great time for Pagans, and obviously for very many others, but not for me.

I don't want to cramp their style - but just air my feelings, and if there is a response, that's great.