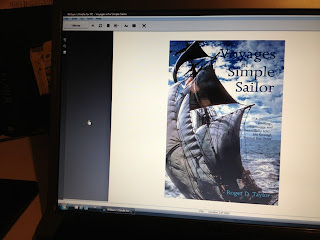 On 3rd February, 2013 I wrote an article about Roger Taylor’s, ‘Mingming’. I included three links to Amazon.co.uk giving details of three of his books. What I didn’t mention was that they are also available for Kindles. If you don’t have a Kindle, you can download a Kindle App free of charge from Amazon, suitable for your computer or your iPhone or an equivalent smartphone.


Last week I handled a paperback version of Roger’s ‘Voyages of a Simple Sailor’ and immediately I wanted my own. Being a cheapskate I looked at Amazon where I discovered I could get it for less in e-book format for my Kindle - not a lot less I grant you, but it was immediately available for my own gratification.


Now that I have read the Kindle version I wished I had paid the extra for the paperback! Handling a book is so much better than simply seeing words on a computer screen. If you buy your own copy you’ll be getting three books in one, because it is divided into three stories: Shipwreck, Capsize and Calms. I won’t spoil it by making a précis of each story, but if you are into sailing and cruising I thoroughly recommend you treat yourself to a good read.


Most reviewers gave the book five out of five! Hence, you can be guaranteed you won’t be disappointed.


I was hooked from the moment I started reading the Preface. Having experienced sailing small junk-rigged boats I could readily understand Roger’s enthusiasm for ‘Mingming’.


Galleries for Voyages of a Simple Sailor