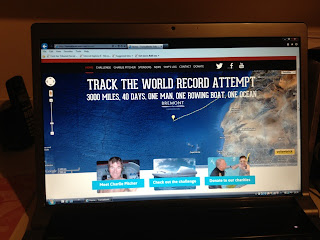 Position 20 days ago
I last mentioned Charlie on Saturday, 16th February, that was 20 days ago. He was well on his way to arriving at the halfway point between La Gomera and Barbados in his attempt at achieving the fastest time for rowing the Atlantic alone from east to west.


He had a very bad point around halfway when the weather became contrary and the sea was aggressive. His boat was rolled, but he survived unscathed, apart from a few things being out of place.


His blog for today hides no secrets. His trusted Autopilot packed up, but he managed to link it to a spare. I think he has about 400 miles to go, and maybe the spare Autopilot will hold out until then. 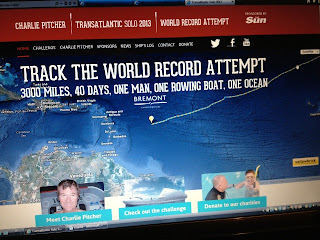 Position today
Apparently he is making good progress and there’s every chance he will achieve the record crossing. Meanwhile he has a very painful bottom to which he applies Arbonne Herbal Nappy Cream for treating saltwater sores.


Unlike his previous row across the Atlantic, he has not seen a single ship, and he is feeling pretty lonely, but he thinks he will be home and dry in less than a week.
The charities he is supporting by raising funds are the C-Group and Great Ormond Street Hospital.