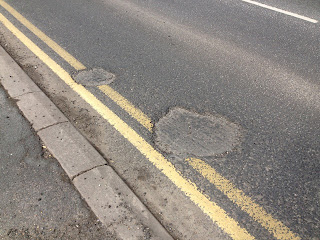 
Yesterday morning Ray Clark and his team at BBC Essex, during the Breakfast Show, joked about potholes on the County’s roads. In fact, it’s not really a matter to be taken lightly, because lives could be at risk, particularly those of cyclists who may have to dodge potholes and find themselves in the path of a motor vehicle.


With hilarity and banter to fill in time, the breakfast presenters discussed a real life game they had devised which involved avoiding potholes when driving to work. They couldn’t make up their minds what to call the game, but came up with four possible names: Car Bingo, Tyre Bagatelle, Pothole Bingo and Dodge the Pothole. I got the impression they favoured the last, which is the most descriptive. 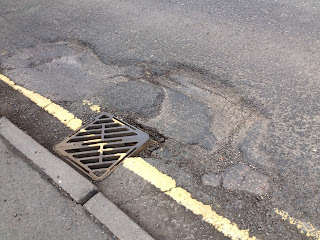 A 'wincer' with a grating
The idea of the game is to get to work with an intact score of 10. In other words if ‘players’ manage to avoid every pothole by dodging them, they arrive at work with full marks. If they clip a pothole they lose ½ a point; if they go over a ‘standard’ pothole they have to dock a full point; if they are unfortunate enough to clash with a ‘wincer’  (a large pothole) they forfeit 2 points, and finally if they blunder into a ‘shredder’ (an enormous pothole) they suffer a loss of 3 points!


I’ve got a feeling they will suffer more than that, as I did this morning when driving my car home after shopping. There were twin potholes just before a turning off the main road. Fortunately, I had slowed down on making my approach to the turning; otherwise there could have been damage to the springs of the car. Certainly, I felt judders as my car’s tyres failed to absorb the impacts.


A half-an-hour later when I walked the footpath by the twin potholes I observed a road maintenance man was measuring the depth of the holes. Someone had obvious reported the situation. I can only hope that  repairs to the road will speedily be done.


(To listen to Wednesday morning’s banter click this first link and move the curser to position 32.00)