As I write this, two guys, Russell Belcher and Aaron Price, are setting off from West Mersea in their specialist Synergy Safari kayak to circumnavigate Britain. Their intention is to use the natural elements of tide and wind to supplement their paddling on the clockwise circuit over a planned period of 90 days. That will take some doing, but with power kites the expedition aim may succeed. I surely hope so, because they are raising money for the Motor Neuron Disease Association http://www.justgiving.com/open-horizons . 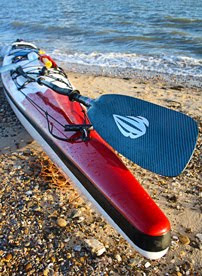 
This morning the weather is not at all encouraging. Burnham-on-Crouch Weather Station http://www.burnhamoncrouchweather.com/ shows that the wind is coming from the southeast at 8.1 mph with gusts of 13.8 mph and moderate drizzle. Their intention is to cross the Thames to the Kent coast – rather them than me!


Their kayak is stuffed with food, provisions and camping gear. Altogether they have planned to stop at 30 campsites and have arranged food stores en route at 5 locations. They have a band of helpers and several commercial sponsors, including Atlantis Kayaks, http://atlantiskayaks.com/ , Mitchell Blades, http://www.mitchellblades.co.uk/ and C-Tug http://www.c-tug.com/ . Ozone is their kites sponsor http://flyozone.com/kitesurf/en/ . My guess is that Russell and Aaron will be relying heavily on their kites for achieving their aim of getting around Britain in 90 days. May they have fair winds, wisdom, strength and God with them along the way.

http://atlantiskayaks.com/kayaks/synergy-safari/
Posted by William Serjeant at 10:25 am